Tubular ball mill introduction, the usual objective of reducing the size of run-of mine ore pieces is to separate the mineral of interest contained in the ore body from associated gangue minerals. As crushing only does not generally liberate a mineral, further size reduction is usually required. This is achieved by grinding the crushed ore in tubular mills or devices such as pan mills or roller-grinder mills. In tubular mills, a grinding media such as steel balls, rods or hard pebbles imparts the forces required for size reduction. On rotating a mill charged with rocks and grinding media, the entire charge rises against the perimeter of the mill in the direction of motion. On reaching a certain height, part of the charge cascades and falls to the bottom of the mill; the other part tends to slip down but soon travels in the direction of motion of the mill. During this process, the media drops repeatedly onto the rock breaking down its size. Some size reduction also takes place due to abrasive forces. As a result of the combined action of repeated impact and abrasion over time, size reduction takes place and given sufficient time the mineral of interest is liberated.

Some tubular mills are specially shaped mills, such as the Hardinge Mill, where only the central portion is cylindrical and the ends are shaped like the frustum of a cone. Straight cylindrical mills, however, are the more common. The grinding medium generally used is in the form of balls, rods or cylindrical media called cylpebs. Both steel and ceramic balls are in use depending on the hardness of the rock. For soft ores, pebbles are added or simply autogenously ground with no medium. Both wet and dry grinding is common. Figure 1 illustrates the grinding action inside a tubular mill.

Rough outlines of three common types of tubular mills are illustrated in Figure 2-A shows that the discharge from the mill is by overflow of the contents. It is best suited to fine grinding to 75–106 mm. 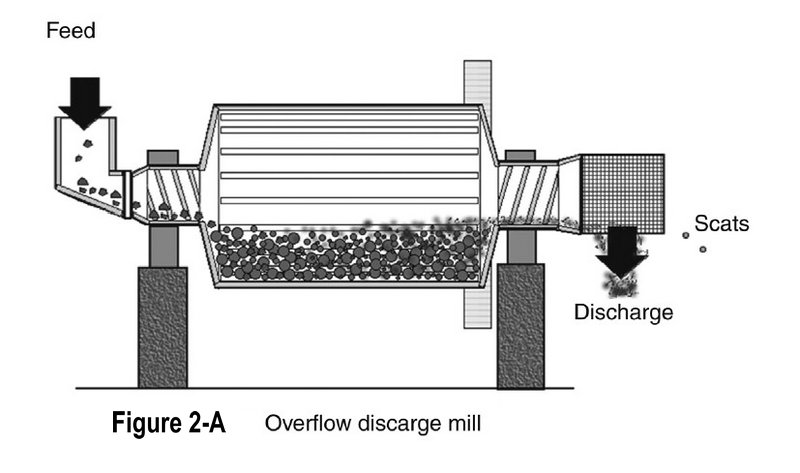 Figure 2-B indicates a mill where a diaphragm or grate is placed before the exit end so that particles greater than the openings of the diaphragm are not discharged but held back for further grinding. Grate discharge mills give less excessive grinding compared to overflow mills and are best suited to grinds to 150–250 mm. In Figure 2 C, the discharge opening is at the centre of the mill, while the feed is from both ends of the mill. The mills are therefore designated as a Centre Periphery Discharge mill. 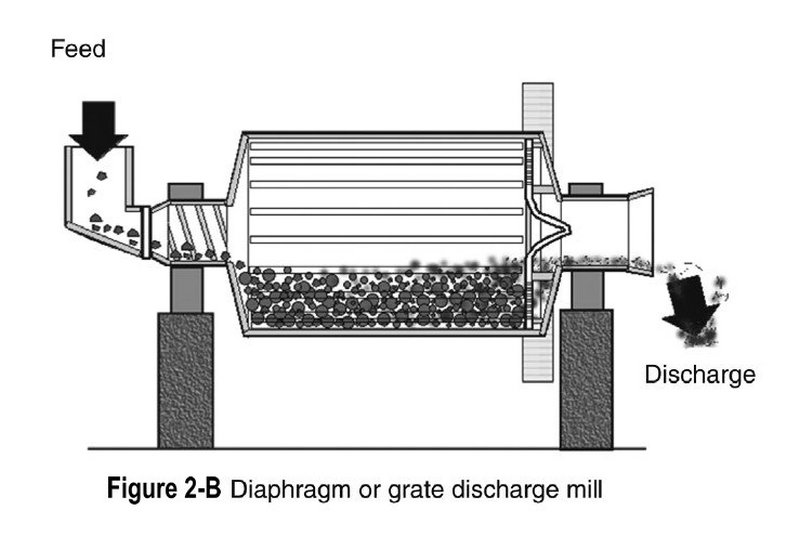 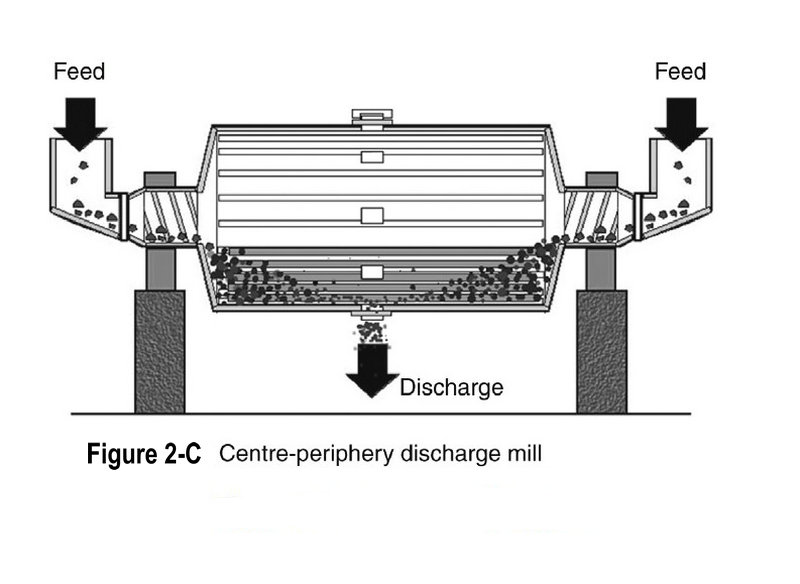 The diameter of the feed trunnion is slightly smaller than the discharge trunnion opening to facilitate flow of slurry through the mill and to prevent the slurry from trying to discharge through the feed trunnion. The basic design parameters of the tubular mills include:
1. size; diameter × length,
2. feed system; one hopper feed, diameter 40–100 cm at 30° to 60° entry angle and top of feed hopper at least 1.5 m above the centre line of the mill for ease of entry of feed,
3. feeder; single or double helical scoop feeder or a spout feeder,
4. discharge system; one exit unit, about 5–110 cm lower than the centre line for overflow mills.

The common sizes of mills, the initial size of feed and the reduction ratio of the feed to product sizes achievable in these mills during the comminution process are indicated in Table 1.

A survey of 40 industrial mills in China found that the maximum ball mill diameter in use was 7.9 metres and length 13.6 metres. Autogenous mills range up to 11 metres in diameter.

Some mills have compartments separated by grates that permit particles having sizes less than the size of the grate to pass through but hold back larger sized particles from entering the next downstream compartment so that further size reduction could take place. In some instances, the different compartments have different sizes of grinding balls, for more efficient grinding.

Several variations of this method of segregating coarser from finer particles within a mill are employed. A mill of this type is the Hardinge mill, where the discharge end of the mill shell is conical in shape. This permits the finer particles to preferentially move into the cone section resulting in some segregation of both fine particles and fine balls within the mill. In the conical section of the mill where the cone narrows down, the drop distance of the charge (and balls) is reduced considerably resulting in lower impact and restricted breakage of the ore. These mills are not very common in the metallurgical industry and are of small tonnage.

Several devices are used to promote a crushing operation within a conventional tumbling mill, such as providing lifters that help to raise the rocks to greater heights before they drop and cascade down. In some cases, the lifters are designed to spiral inside the mill, which promotes faster and possibly more even flow within the mill. The number of such lifters fixed along the perimeter is generally guided by the rule:
Number of lifters ≈ 3.3 π D (for the mill diameter, D in m) for double wave liners
≈ 6.6 D (for D in m) for single wave liners.

The functions of the lifters are incorporated into the mill liners, which are designed with different profiles. They serve the dual purpose of saving wear of the steel body of the mill and help to lift the charge to different heights before they cascade or cataract to impinge at the toe of the mill charge. While determining the performance of these mills, the influence of the number of lifters is usually neglected. The mill liners could be manganese steel or NIHard or high carbon steel either as grid or solid liners. Hard rubber or hard synthetic liners, 65–75 mm thick, are common. Liner surfaces can be smooth, ribbed or waved. The waves are usually 65–90 mm above the liner thickness, for double wave liners and 60–75 mm for single wave liners. The rule of thumb is that the wave height is 1.5–2.0 times the thickness of the liner. The liner wear is roughly proportional to the speed of rotation of the mill.

Tubular ball mills ride on steel tyres or are supported at both ends by trunnions. Girth gears bolted to the shell drive the mill through a pinion shaft from a prime mover drive. The prime movers are usually synchronous motors that operate through an air clutch or gear system. The girth gear is usually located at one end of the mill but depending on the manufacturer, could be located at other places. During rotation, a portion of the charge (the ore plus the grinding media) is lifted along the perimeter of the shell and after exceeding the angle of repose, part of it slides down while part cascades down and drops to the toe of the shell, thus imparting the grinding and crushing actions (Figure 1).

The energy of impact by the steel balls on the rock particles will depend on the height through which they fall and the angle at which impact occurs. The size reduction that follows will depend on:
1. the charge characteristics (mass, volume, hardness, density, size distribution),
2. the characteristics of the grinding media (mass, density, number, ball size distribution),
3. speed of rotation of the mill,
4. slurry density when wet grinding is adopted.

Quantitative estimations of these variables are considered in the following sections with respect to ball mills.

3.1 Charge Volume
It is important that the mill should not be overfilled or under filled with the charge. Over loading tends to accumulate fines at the toe of the mill, which results in a cushioning effect thus absorbing the impact, which causes breakage. When the loading of rock is low, excessive ball-to-ball contact again retards the rate of breakage. The operator therefore has to compute the optimum quantity of each constituent to obtain the required product size and to maintain the predetermined output rate while maximising energy efficiency.

Normally, the bulk rock occupies 20–25% of the mill volume and the balls in a ball mill occupy the remaining charge volume during dry grinding. During wet grinding the slurry occupies the remaining volume after the balls have been charged.

3.3 Ball Size at Initial Ball Charge
Ball sizes commercially available for charging in grinding mills range from 10 to 150 mm. The number, size and mass of each ball size used depend on the mill load and whether the balls are being charged for the first time to commence an operation or as replacements for worn out balls.

3.4 Ball Size as Replacement
During mill operation, grinding balls wear and are reduced in size. In doing so, the grinding characteristics change. The extent of wear would depend on the characteristics of the rock present, such as surface hardness, density and composition. The abrasive action on the surface of the balls increases with time. Ball wear and its effect on grinding have been studied extensively over the years. The study has been conducted by
1. Measuring the change in dimension, (i.e. diameter) of the ball and
2. Measuring the change in ball mass.
As a general rule, the wear on balls is directly proportional to the surface area/unit mass and hence inversely proportional to the ball diameter.

The extent of wear on the grinding balls depends mainly on the abrasive nature of the rock and also by mutual attrition. Other factors affecting abrasion of the grinding media are
1. speed of mill rotation,
2. mill diameter,
3. S.G. of the mineral,
4. work Index of the mineral.