1. What is the sorting process and principle of jigging beneficiation processing?

Jigging beneficiation is carried out in a jig machine. The basic structure of all types of jig machines is similar, and its separation process is carried out in a jigging chamber. The jig chamber has a screen plate in the middle layer, from under the screen plate a vertical alternating water flow is fed periodically, and the ore is fed above the screen plate to form a dense layer of material called the layer, where the water flows through the screen plate and the layer. During the rise of the water flow, the layer is lifted and loosened, and the light minerals rise faster with the water flow, while the heavy minerals rise slower; while when the water flow falls, the light minerals fall slower, while the heavy minerals fall faster. In this way, the heavy minerals tend to the bottom, and the light minerals are located in the upper layer. As the water flow continues to fall, the layer looseness decreases and the movement of coarse particles is hindered. Later the layer becomes more and more compact, only the fine particles can pass through the gap downward movement, called “drilling gap movement”. The downward flow of water stops, the stratification effect also stops, this is a cycle. Then the water flow begins to rise again, starting the second cycle. This cycle continues, and finally the denser particles are concentrated in the bottom layer, and the less dense particles are located in the upper layer, completing the process of stratification by density, as shown in the following Figure. After being discharged separately with a special discharge device, products of different densities can be obtained. The above is the sorting process and principle of jigging beneficiation. 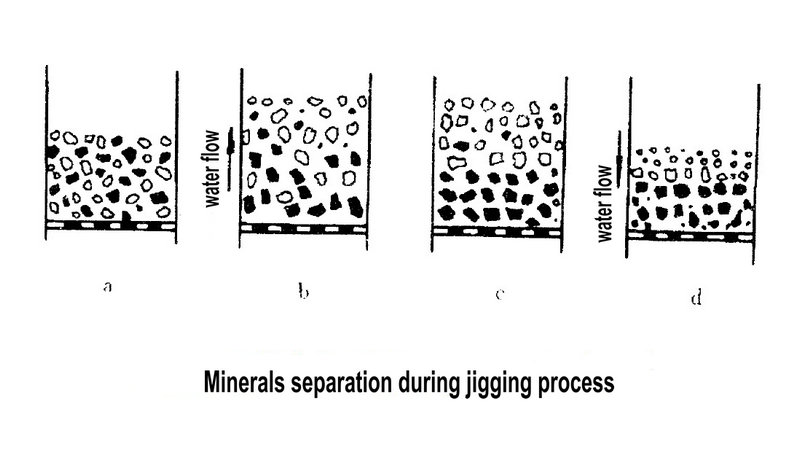