Roll crushers consist of two or more adjacent rolls placed parallel to each other and rotated in opposite directions. Single roll crushers are also available which rotate a single roll against a fixed breaker plate. Mineral or rock particles placed between the rolls are nipped and then crushed as they pass between the rolls. Rolls are held against each other by springs.

Two types of roll crushers are generally designed. In the first type, both rolls are rigidly fixed to a frame with provision for adjusting the lateral position of one of the rolls to control the gap between them. Once set these rolls are locked into place. One roll is attached to the driving mechanism while the other rotates by friction. Single roll crushers are also available which rotate a single roll against a fixed breaker plate. In the second type, at least one roll is spring mounted which forms the driving roll, the other roll rotates by friction (following Figure). The nest of springs helps to provide uniform pressure along the length of the rolls. The springs are helical and pressure varies with the size of crusher and could be as high as 6 t/m (about 8300 kPa). In some roll crushers the rolls are individually driven. The drive is either by gears or belt. Both rolls usually rotate at the same speed but some crushers are designed such that one roll could rotate faster than the other. For fine grinding both rolls are rigidly fixed to the base, and therefore, they do not permit any movement of the rolls during operation. The surfaces of the rolls are smooth, corrugated or ribbed. Heavy duty toothed rollers are sometimes used as primary crushers, but the use of such rollers in the metallurgical industry is very limited. 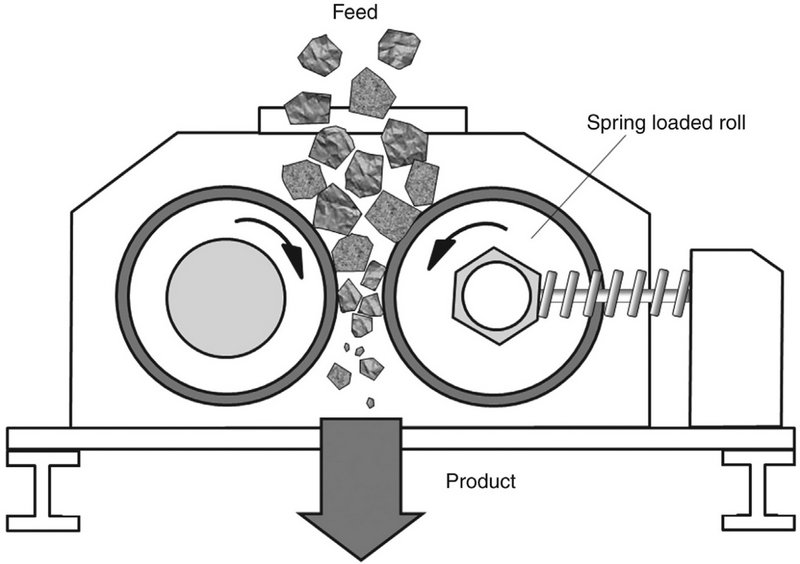 Some rollers are toothed. The shape of the teeth is generally pyramidal. The roll surfaces play an important part in the process of nipping a particle and then dragging it between the rolls. The corrugated and ribbed surfaces offer better friction and nip than smooth surfaced rolls. The toothed surfaces offer additional complex penetrating and compressive forces that help to shatter and disintegrate hard rock pieces.

The usual crusher sizes and power ratings for different types of roll faces, as described by various manufacturers’ literatures, are summarised in the following Table

Roll crushers are generally not used as primary crushers for hard ores. Even for softer ores, such as chalcocite and chalcopyrite, they have been used as secondary crushers. Choke feeding is not advisable as it tends to produce particles of irregular size. Both open and closed circuit crushing is employed. For close circuit the product is screened with a mesh size much less than the set.

The following figure is a typical set-up where ores crushed in primary and secondary crushers are further reduced in size by a rough roll crusher in an open circuit followed by finer size reduction in a closed circuit by a roll crusher. Such circuits are chosen as the feed size to standard roll crushers normally does not exceed 50 mm. 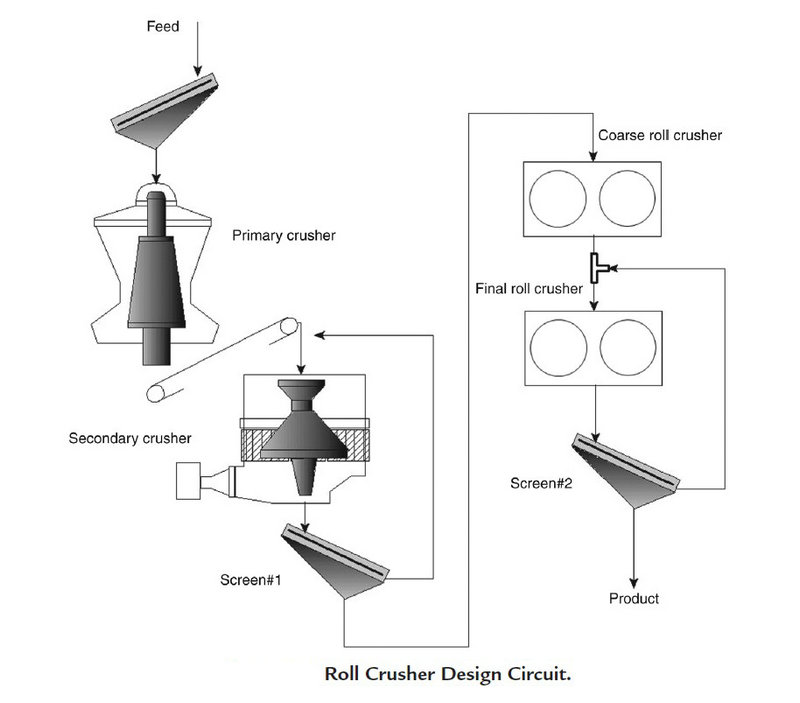 The feed to roll crushers is usually dry. Moisture tends to clog the crusher and could result in the formation of hard crust, which impairs operation. Hence, dry crushing is preferred. Sometimes, water is added between the rolls, which help to prevent formation of the crust and also to remove the hard cake that tends to form on the roll surface. Wet grinding is usually carried out when fine grinding is required.

Rock particles are usually fed through a chute designed to distribute the charge evenly along the width (length) of the roll. About two-thirds of a roll–width is active. As in any crusher, particle sizes less than the distance between the rolls tend to pass through uncrushed.

Particles that are larger than the opening are nipped and crushed. The maximum size of particle that is nipped without slippage depends on friction, distance between rolls and roll size.

The size of the product depends on the crusher set, the distance between the rolls. Due to single pass operation, it is evident that no middlings or over-size is produced.

The normal speed of operation of commercial light duty rolls is 130–300 rpm compared to heavy duty rolls whose operating speeds are in the region of 80–100 rpm. Regulated slow rate of feeding spread over evenly across the width of rolls is preferred when closed circuit operation is adopted for finer product size.