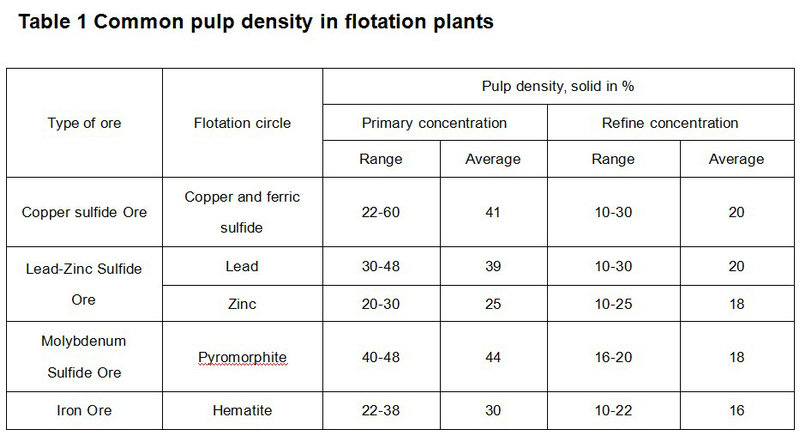 Pulp density is an important process factor in the flotation process, which affects the following techno-economic indicators.

3. The amount of chemical agents

As the density of the pulp increases, the capacity of the flotation machine (in terms of treatment capacity) can be increased.

When the pulp is thicker, the flotation time will be extended, which is beneficial to improve the recovery rate or increase the productivity of the flotation machine.

The thicker the slurry, the lower the water and electricity consumption will be when processing per ton of ore.

In actual production, the most suitable pulp density for flotation, in addition to the above factors, must also take into account the nature of the ore and the specific flotation conditions. The general principle is: flotation of large density, coarse size minerals, often with a thicker slurry; conversely, when flotation of small density, fine size and mud, with a thinner slurry; roughing operations with a thicker slurry, to ensure high recovery and save chemicals, selection with a thinner concentration, is conducive to improving the quality of the concentrate, sweeping the concentration of the operation by the roughing influence, generally do not control separately.

Different slurry conditions are required according to different grain grades. The slurry is graded into two or three branches according to the coarse and fine grading for slurry conditioning. The particle size limits of the grading can be determined by test. The following Figure illustrates a two-branch pulp adjustment scheme. 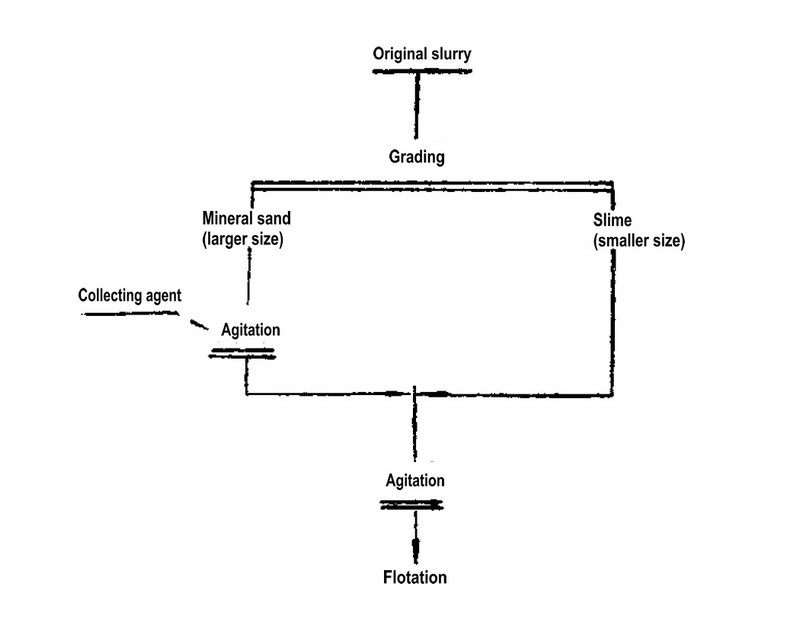 In the two-branch slurry solution, the agent is only added to the coarse sand part, and after the coarse sand slurry, the fine slime part is flushed into the coarse sand and flotation together with it. This solution is applicable to the case where the flotation activity of fine particles is higher than that of coarse particles, and the coarse particles need to increase the dosage or add other powerful collecting agents. In addition, the coarse grains require higher concentration of chemicals to be satisfied by grading and slurry adjustment. For example, the experience of graded slurry of lead-zinc ore proves that the concentration of yellowing agent in coarse grains is 7-10 times higher than the average value of conventional slurry, which has the advantage of ensuring effective flotation of coarse grains and improving selectivity.

Using a variety of sulfide minerals in the inflatable agitation, the difference in the degree of surface oxidation, can expand the difference in their floatability, conducive to the next step of sorting. For example, the pulp of copper sulphide ore inflatable slurry proves that, before dosing inflatable slurry for 30 minutes, the magnetic pyrite and pyrite in the ore is oxidized, while chalcopyrite still maintains its original floatability. However, if the inflatable slurry time is too long, chalcopyrite will also be oxidized, forming iron hydroxide film on its surface and reducing the floatability; the separation of toxic sand and pyrite is also often done by inflating the slurry to oxidize the surface of the toxic sand to achieve the purpose of separation flotation.