Since the first unit was commissioned in 1980, thousands of Knelson concentrators were installed. In recent years, the Knelson Concentrator has become the preferred gravity device to recover free gold. Compared to other centrifuges, it possesses quite different features either in design or separation mechanisms.

One unique feature of the Knelson Concentrator is its riffle construction and tangential fluidization water flow in the separating bowl, which partially fluidizes the concentrate bed. As a result, the unit can achieve high recovery over a wide size range. Industrial recoveries of gravity recoverable gold have been measured as high as ninety percent. Recovery is strongly influenced by feed rate and gangue density.

Knelson Concentrators have a large throughput capacity, e.g. a 76 cm Knelson Concentrator can treat up to 40 tonnes of material per hour. Locating the Knelson within the grinding circuit can eliminate the need for other gravity recovery devices. Another advantage of the Knelson is its ability to treat a wide size range of material without desliming, something most other centrifuges cannot do.

The Manual Discharge Knelson is especially suitable for the recovery of very low grade high density particles, typically on account of the limited concentrate volume. It develops a centrifugal intensity of 60 ‘g’, and can process feeds finer than 6 mm. The feed is introduced to the bottom of the bowl by gravity through a downcomer. The feed requires only enough water for transport, and any density from 0 to 70% solids can be handled without any detrimental effect on operating efficiency.

Under the effect of the centrifuga1 force field. the heavy particles will report to the riffles as concentrate. whereas gangue minerals will flow to the outer rim as tails. The centrifugal force that would cause packing of material in the rings is partially offset by the fluidization water. The water jets are tangentially injected into the bowl from small holes on the Knelson Concentrator bowl in a direction opposite to the bowl’s rotation.

The resulting fluidized bed behaves as a heavy liquid whose density is that of the pulp, and hindered settling conditions prevail. It is in this constantly agitated environment that concentration takes place with the particles of higher specific density displacing the lighter ones.

Very high concentration ratios can be achieved, even above 500, at little or no loss of recovery. The Manual Discharge Knelson is a batch machine. The feed must be interrupted while concentrate removal takes place. This takes from 5 to 10 minutes, and is accomplished by unlocking an access door, removing a drain plug and flushing the concentrate to a secure gold room via a pipeline or into a container.

The manual discharge of its concentrate makes frequent flushing difficult, yielding loading cycles of two hours or more. Although virtually no gold operation can boast gold feed grades that would overload the Knelson over such recovery cycles, loss of recovery due to concentrate bed erosion should require shorter recovery cycles.

The Knelson Concentrator requires little maintenance. It is sturdy and has only one moving part, the rotor. Its drive shaft passes through two pillow-block bearings, wetted surfaces are made of stainless steel, and the concentrating bowl is moulded in wear-resistant polyurethane or stainless steel.

The removal of concentrate can be accomplished automatically in less than two minutes. The feed is first diverted (generally to a cyclone pump sump or ball mill), the fluidization water flowrate and the speed of rotation are reduced. The concentrate is then flushed from the concentrating rings past the feed deflector and piped directly to a secure gold room. 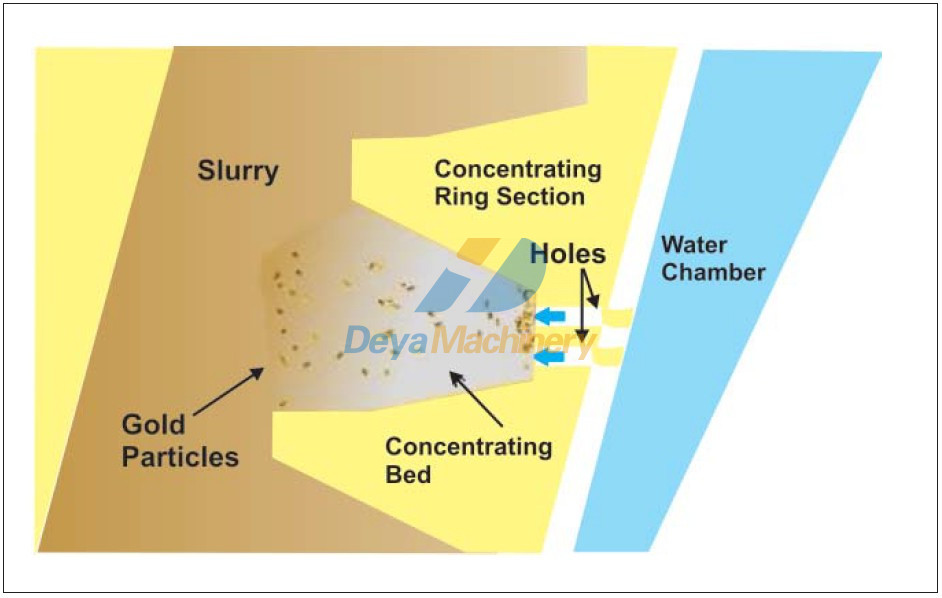 The machines utilise the principles of a centrifuge to enhance the gravitational force experienced by feed particles to effect separation based on particle density. The key components of the unit are a cone shaped “concentrate” bowl, rotated at high speed by an electric motor and a pressurized water jacket encompassing the bowl. Feed material, typically from a ball mill discharge or cyclone underflow bleed, is fed as a slurry toward the centre of the bowl from above. The feed slurry contacts the base plate of the vessel and, due to its rotation, is thrust outward. The outer extremities of the concentrate bowl house a series of ribs and between each pair of ribs is a groove. During operation the lighter material flows upward over the grooves and heavy mineral particles (usually of economic value) become trapped within them. Pressurized water is injected through a series of tangential water inlets along the perimeter of each groove to maintain a fluidized bed of particles in which heavy mineral particles can be efficiently concentrated. The Knelson concentrator typically operates as a batch process, with lighter gangue material being continuously discharged via overflow and a heavy mineral concentrate periodically removed by flushing the bowl with water. 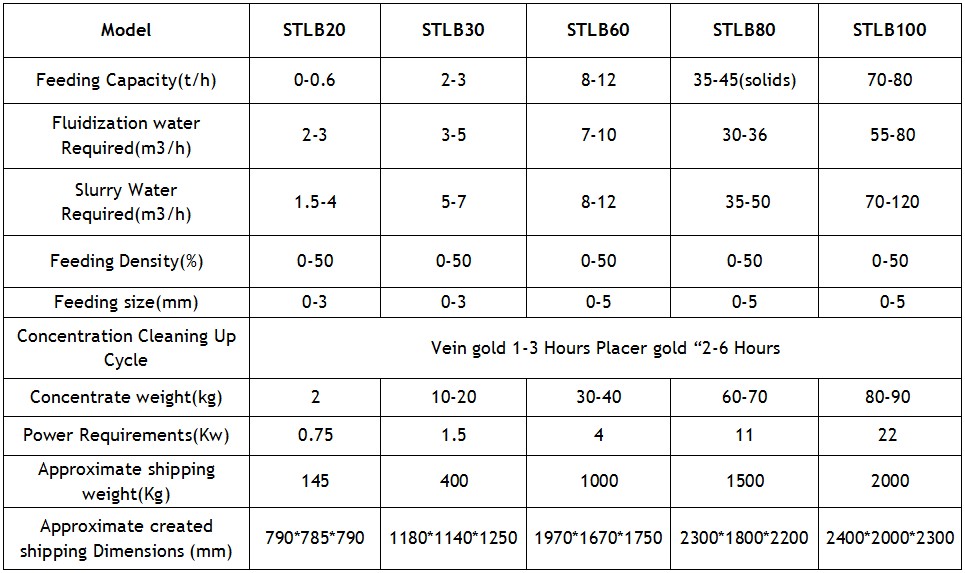 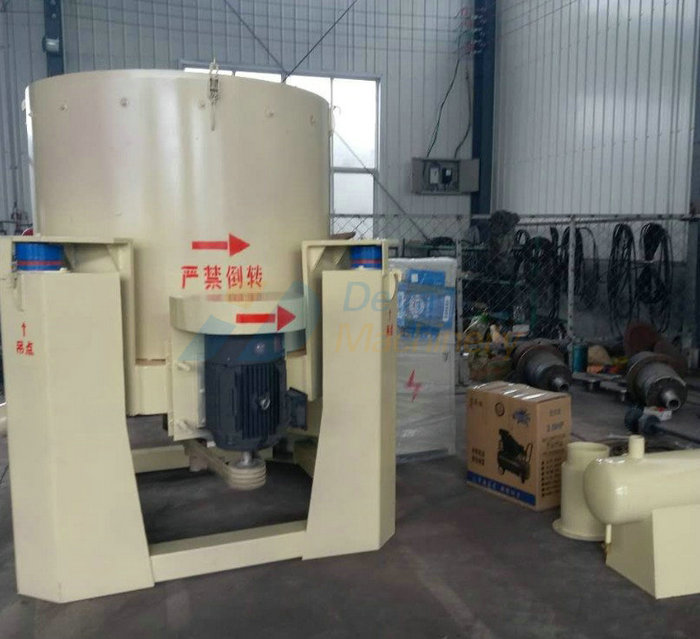 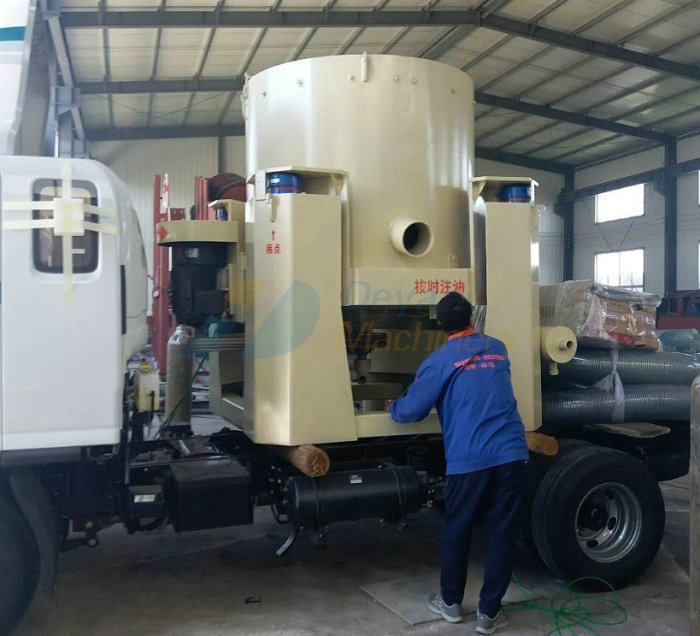 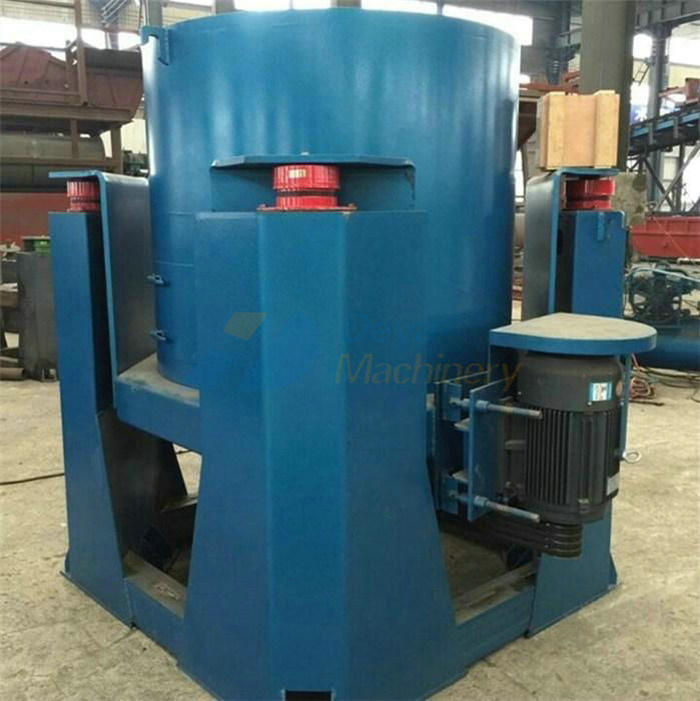 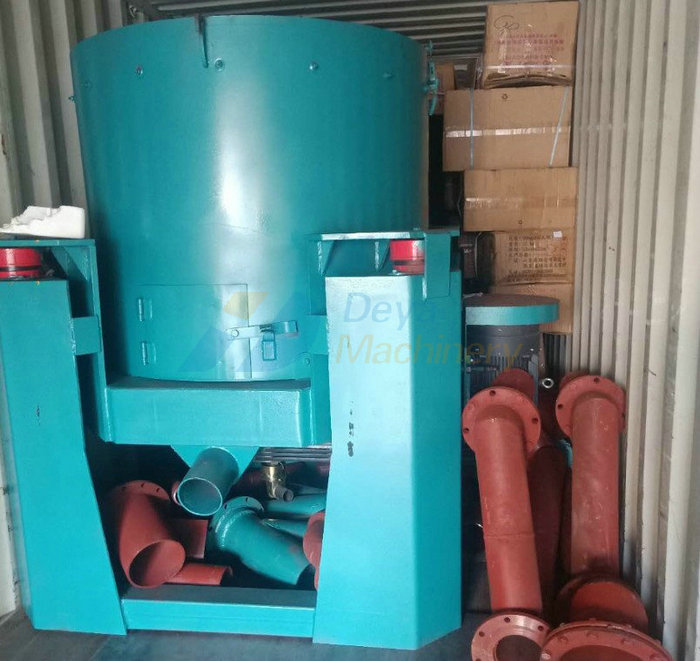 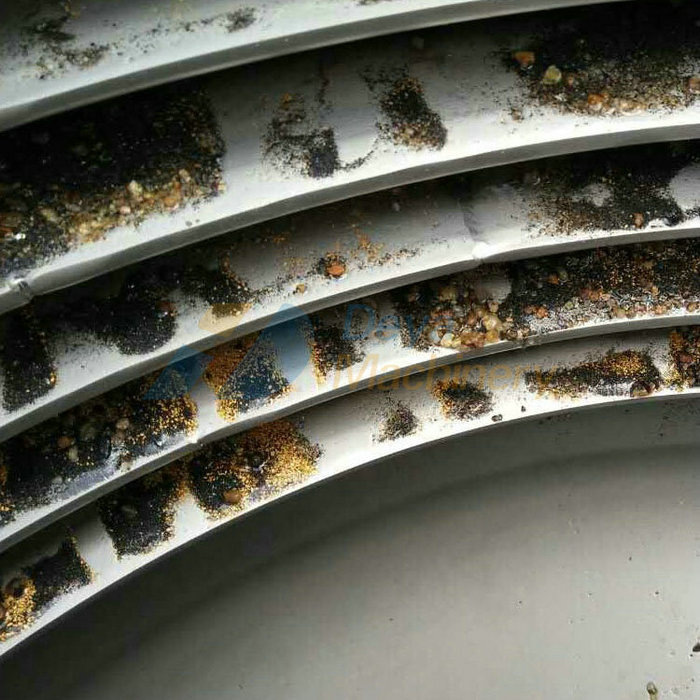