After initial liberation of a mineral constituent from its ore by crushing, grinding and screening, separation of minerals by size is normally attempted by a classifying process. In mineral processing operations, classification and separation of mixtures of fine and coarse particles and also of lighter and heavier particles may be performed in a wet or dry state. The majority of separations are carried out in a liquid environment because of an increased efficiency. The basic technique employed is to allow particles to settle under gravity in a liquid medium (usually water). The higher terminal velocity of irregular shaped, coarser, heavier particles allows these particles to reach the bottom of the vessel at a faster rate compared to particles that are smaller and lighter. Removing the settled particles while the others are still settling offers a simple means of a separation. For very small particles, such as clay or silt, whose size approaches colloidal dimensions, long times are required to settle and the small difference in settling rates of these fine particles leads to low separation efficiency. To accelerate the settling rate of these fine particles, centrifugal forces are employed such as in cyclones or hydrocyclones.

The design of mechanical classifiers includes a settling tank and a mechanism to remove the settled solids from the bottom of the tank. The settled solids are usually conveyed away by some discharge system, while the overflow is collected in launders and pumped away. The classifier designs differ mainly in the mode of removing the underflow and the overflow slurries. Immersed spiral or rakes are generally used for underflow slurries and an open launder carries the overflow. Figure 1 is a sketch of a spiral classifier where the spiral conveyor is installed within the bowl. The spiral operates along the sloping sides of the tank and dredges the thick sludge out of the tank. Figure 2 shows the spiral conveyor replaced by a rake, which drags the sand up the incline for discharge.

The shape of the spiral classifier tanks is usually rectangular (Figure 1). The feed is introduced at a position about halfway along the length of the settling tank. The tank slopes range from 14° to 18°. The slope is adjusted such that the top end is higher than the height of the overflow weir. The spirals impede the downward slurry movement resulting in some build-up. The sides are therefore raised. Classifiers with raised sides are generally called high or H-type classifiers. In contrast, classifiers with low sides and shallow tanks are known as S-type classifiers. The S-type classifiers have almost gone out of use. The maximum lengths of H-type classifiers are about 14 m with widths of 0.5–7 m and spirals up to 2400 mm in diameter. The speed of rotation of the spirals varies inversely with size. Thus, classifiers with a 300 mm spiral diameter revolve at about 8–20 rpm, while the 2000 mm diameter spirals rotate at about 2–5 rpm to give a sand conveying speed of 2–3.5 m/s. The raking capacity of the large classifiers is approximately 200 t/h, while smaller classifiers have raking capacities as low as 1.5 t/h. To some extent, the capacities depend on the number and design of the helix in the spiral. The helix could be single, double or even triple pitched. The pitch is related to the diameter of the spirals. It is generally of the order of 0.5–0.75 times the diameter of the shaft. The number of helix may be single (simplex) or two side by side (duplex) depending on the dimensions of the tank. 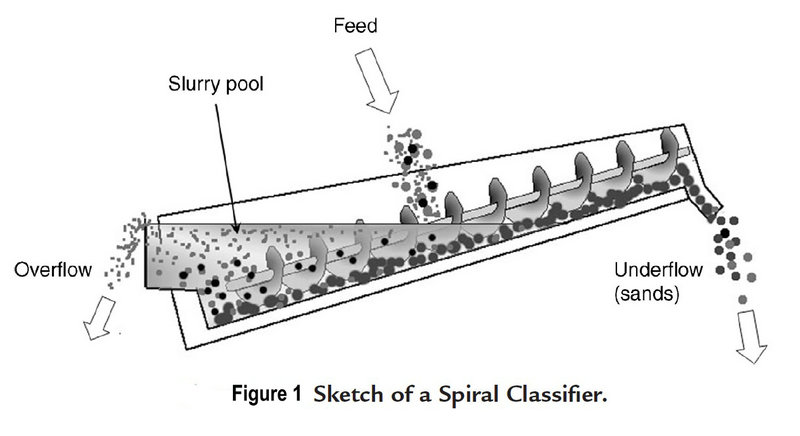 When rakes are used in place of spirals, the classifiers are called Rake classifiers. These are less common than spiral classifiers. The rakes consist of one or more parallel lines of steel plates that hang from a central shaft or shafts. The plates are hinged onto these shafts and have a reciprocating movement. As in spirals, the plates agitate the settling solids and drag the settled particles up the inclined base of the tank. At the end of the stroke the plates rise sharply and then are lowered back into the tank after an eccentric movement to its original position. On repeating the operation the settled matter is conveyed up the inclined slope and finally discharged into the sands launder. The overflow stream passes over a weir at the bottom end of the tank and pumped to the next processing stage. 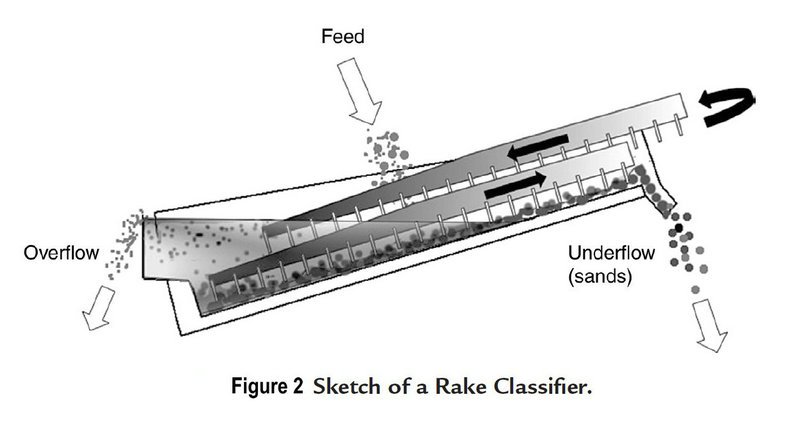 Rapid settling and classification is achieved by increasing the force acting on the particles by replacing the gravitational force by centrifugal forces. Several types of equipment based on this principle are used for the purpose, such as the hydrocyclone. The hydrocyclone has no moving parts and is the easiest to operate. Figure 3 is a sketch of a typical hydrocyclone. 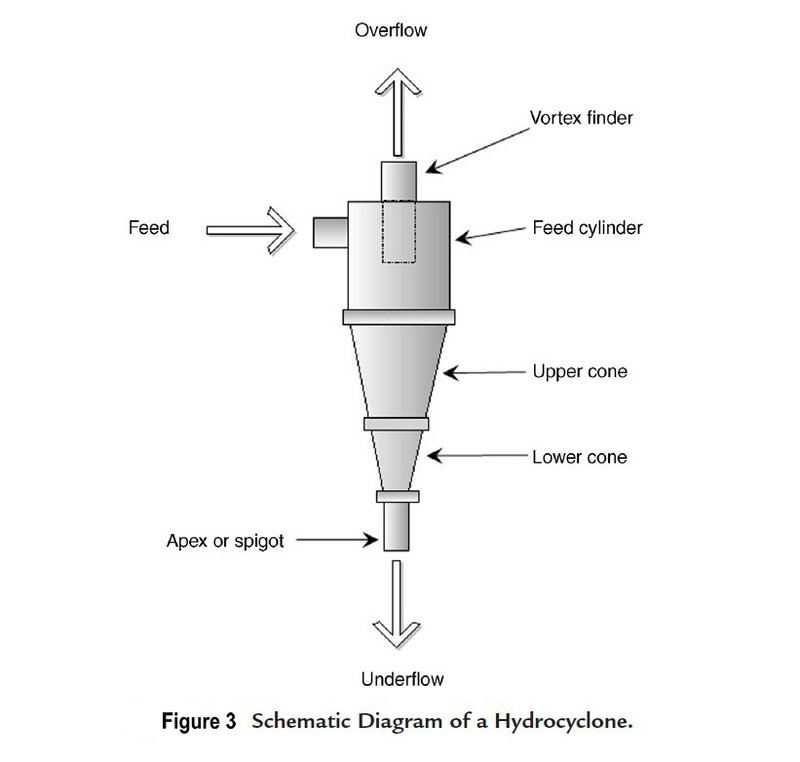 The feed entry is either tangential to the centre line of entry or forms an involuted entry. The cross-section of the entry pipe is usually circular, oval or rectangular; each of which provides a different velocity profile inside the feed chamber and the cyclone cone. The top of the feed chamber is closed with a plate through which a pipe known as a vortex finder passes. The bottom of the vortex finder protrudes below the feed chamber. Below the feed chamber thebody of a cyclone is shaped like an inverted cone, which converges to a smaller cone, which serves as the outlet of the coarser size fractions in the feed. The feed chamber and the cones are lined inside with rubber or synthetic linings due to abrasive nature of most metallurgical slurries. The lining material is hard rubber, neoprene or urethane. In some cases, the protective lining is sprayed inside forming a hard monolithic bond with the base metal. The apex is sometimes fitted with a concentric, hardwearing synthetic rubber inner sleeve, which can be squeezed hydraulically or pneumatically to alter the diameter of the opening. Hydrocyclones are occasionally provided with nozzles just above the apex for injecting water to compensate for water loss and loss of fines. However, constant effort is made to improve on the design, aimed at improvement of the flow dynamics of the slurry inside the cyclone. 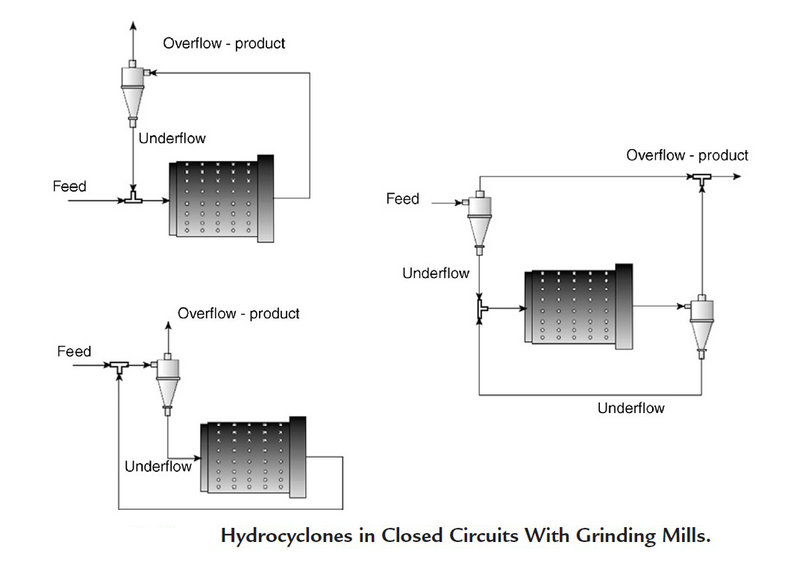