Dry low-intensity magnetic separation is confined mainly to the concentration of coarse sands which are strongly magnetic, the process being known as cobbing, and often being carried out in drum separators. Below the 0.5 cm size range, dry separation tends to be replaced by wet methods, which produce much less dust loss and usually a cleaner product. Low-intensity wet separation is now widely used for purifying the magnetic medium in the dense medium separation process, as well as for the concentration of ferromagnetic sands.

Drum separators are the most common machines in current use for cleaning the medium in DMS circuits and are widely used for concentrating finely ground iron ore. They consist essentially of a rotating non-magnetic drum (see attached figure 1 drum separator) containing three to six stationary magnets of alternating polarity, although the Permos separator uses many small magnet blocks, whose direction of magnetisation changes in small steps. This is said to generate a very even magnetic field, requiting less magnetic material.

Although initially drum separators employed electromagnets, permanent magnets are used in modern devices, utilising ceramic or rare earth magnetic alloys, which retain their intensity for an indefinite period. Separation is by the “pick-up” principle. Magnetic particles are lifted by the magnets and pinned to the drum and are conveyed out of the field, leaving the gangue in the tailings compartment. Water is introduced into the machine to provide a current which keeps the pulp in suspension. Field intensities of up to 0.7 T at the pole surfaces can be obtained in this type of separator.

The drum separator shown in figure 1 is of the concurrent type, whereby the concentrate is carried forward by the drum and passes through a gap, where it is compressed and dewatered before leaving the separator. This design is most effective for producing an extremely clean magnetic concentrate from relatively coarse materials and is widely used in dense medium recovery systems.

The separator shown in figure 2 is of the counter-rotation type, where the feed flows in the opposite direction to the rotation. This type is used in roughing operations, where occasional surges in feed must be handled, where magnetic material losses are to be held to a minimum, while an extremely clean concentrate is not required, and when high solids loading is encountered.

Figure 3 shows a counter-current separator, where the tailings are forced to travel in the opposite direction to the drum rotation and are discharged into the tailings chute. This type of separator is designed for finishing operations on relatively fine material, of particle size less than about 250 μm. Drum separators are widely used to treat low grade taconite ores, which contain 40-50% Fe, mainly as magnetite, but in some areas with hematite, finely disseminated in bands in hard siliceous rocks. Very fine grinding is necessary to free the iron minerals that produce a concentrate that requires pelletising before being fed to the blast furnaces.

Rare earth roll separators use alternate magnetic and non-magnetic laminations. Feed is carried onto the magnetic roll by means of a thin belt as shown in Figure 4, hence there is no bouncing or scattering of particles as they enter the magnetic zone, and they all enter the magnetic zone with the same horizontal velocity. These factors contribute to achieving a sharp separation. Roll speed can be adjusted over a wide range, allowing the product quality to be “dialled in”.

Dry rare earth drum separators provide a fan of separated particles which can often be seen as distinct streams (see attached figure 5). The fan can be separated into various grades of magnetic product and a nonmagnetic tailing. In some mineral sands applications, drum separators have been integrated with one or more rare earth rolls, arranged to treat the middlings particles from the drum as shown in Figure 5. 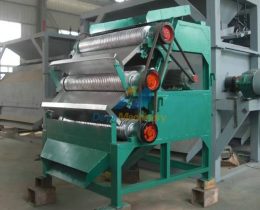 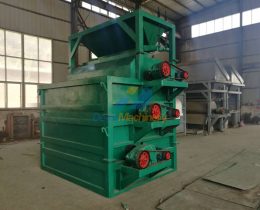 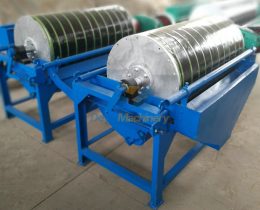 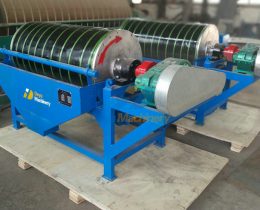 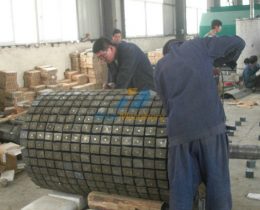