The distinctive feature of this class of jaw crusher is the two plates which open and shut like animal jaws. The jaws are set at an acute angle to each other, and one jaw is pivoted so that it swings relative to the other fixed jaw. Material fed into the jaws is alternately nipped and released to fall further into the crushing chamber. Eventually it falls from the discharge
aperture.

Jaw crushers are classified by the method of pivoting the swing jaw (see attached figure). In the Blake crusher the jaw is pivoted at the top and thus has a fixed receiving area and a variable discharge opening. In the Dodge crusher the jaw is pivoted at the bottom, giving it a variable feed area but fixed delivery area. The Dodge crusher is restricted to laboratory use, where close sizing is required, and is never used for heavy-duty crushing as it chokes very easily. The Universal crusher is pivoted in an intermediate position, and thus has a variable delivery and receiving area.

The Blake crusher was patented by W.E. Blake in 1858 and variations in detail on the basic form are found in most of the jaw crushers used today. There are two forms of the Blake crusher double toggle and single toggle.

The important features of the machine are:

Attached figure shows a cross-section through a double toggle jaw crusher. All jaw crushers are rated according to their receiving areas, i.e. the width of the plates and the gape, which is the distance between the jaws at the feed opening. For example, 500x750mm jaw crusher has a width of 500 mm and a gape of 750 mm.

Consider a large piece of rock falling into the mouth of the crusher. It is nipped by the jaws, which are moving relative to each other at a rate depending on the size of the machine and which usually varies inversely with the size. Basically, time must be given for the rock broken at each “bite” to fall to a new position before being nipped again. The ore falls until it is arrested. The swing jaw closes on it, quickly at first and then more slowly with increasing power towards the end of the stroke. The fragments now fall to a new arrest point as the jaws move apart and are then gripped and crushed again. During each “bite” of the jaws the rock swells in volume due to the creation of voids between the particles. Since the ore is also falling into a gradually reducing cross-sectional area of the crushing chamber, choking of the crusher would soon occur if it were not for the increasing amplitude of swing towards the discharge end of the crusher. This accelerates the material through the crusher, allowing it to discharge at a rate sufficient to leave space for material entering above. This is arrested or free crushing as opposed to choked crushing, which occurs when the volume of material arriving at a particular cross-section is greater than that leaving. In arrested crushing, crushing is by the jaws only, whereas in choked crushing, particles break each other. This interparticle comminution can lead to excessive production of fines, and if choking is severe can damage the crusher.

The discharge size of material from the crusher is controlled by the set, which is the maximum opening of the jaws at the discharge end. This can be adjusted by using toggle plates of the required length. Wear on the jaws can be taken up by adjusting the back pillow into which the back toggle plate bears. A number of manufacturers offer jaw setting by hydraulic jacking, and some fit electromechanical systems which allow remote control.

A feature of all jaw crushers is the heavy flywheel attached to the drive, which is necessary to store energy on the idling half of the stroke and deliver it on the crushing half. Since the jaw crusher works on half-cycle only, it is limited in capacity for its weight and size. Due to its alternate loading and release of stress, it must be very rugged and needs strong foundations to accommodate the vibrations.

Jaw crushers are extremely heavy-duty machines and hence must be robustly constructed. The main frame is often made from cast iron or steel, connected with tie-bolts. It is often made in sections so that it can be transported underground for installation. Modern jaw crushers may have a main frame of mild steel plate welded together.

The jaws themselves are usually constructed from cast steel and are fitted with replaceable liners, made from manganese steel, or “Ni-hard”, a Ni-Cr alloyed cast iron. Apart from reducing wear, hard liners are essential in that they minimize crushing energy consumption, reducing the deformation of the surface at each contact point. They are bolted in sections on to the jaws so that they can be removed easily and reversed periodically to equalize wear. Cheek plates are fitted to the sides of the crushing chamber to protect the main frame from wear. These are also made from hard alloy steel and have similar lives to the jaw plates. The jaw plates themselves may be smooth, but are often corrugated, the latter being preferred for hard, abrasive materials. Patterns on the working surface of the crushing members also influence capacity, especially at small settings. Laboratory tests have demonstrated that the capacity is reduced about 50 times when a corrugated profile is used rather than a smooth surface. The corrugated profile is claimed to perform compound crushing by compression, tension, and shearing. Conventional smooth crushing plates tend to perform crushing by compression only, though irregular particles under compression loading might still break in tension. Since rocks are around 10 times weaker in tension than compression, power consumption and wear costs should be lower with the corrugated profiles. Nevertheless, some type of pattern is desirable for the jaw plate surface in a jaw crusher, partly to reduce the risk of undesired large flakes easily slipping through the straight opening, and partly to reduce the contact surface when crushing flaky blocks. In several installations, a slight wave shape has proved successful. The angle between the jaws is usually less than 26 degree as the use of a larger angle than this causes slipping, which reduces capacity and increases wear. 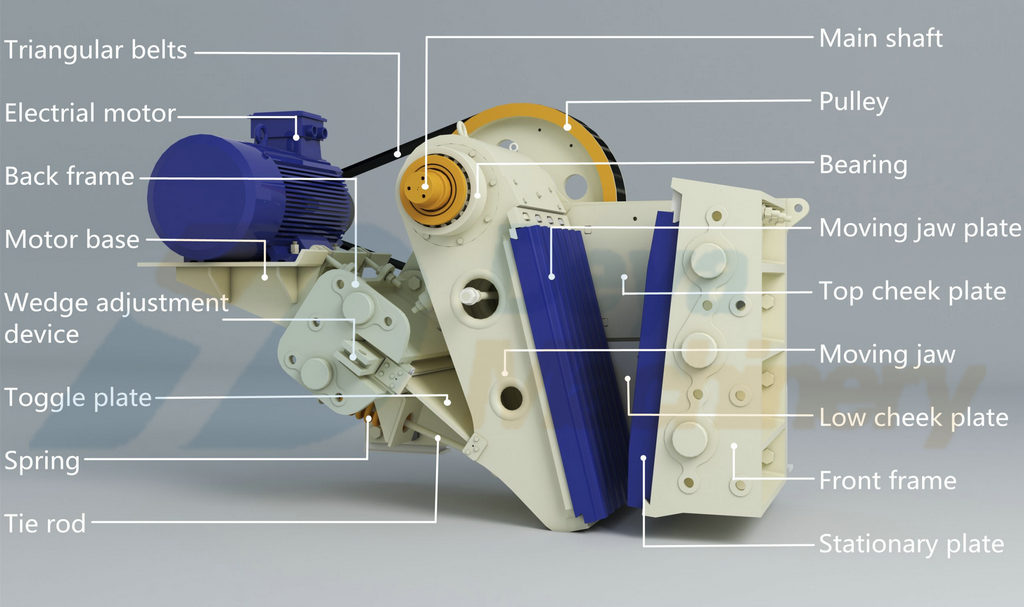 In order to overcome problems of choking near the discharge of the crusher, which is possible if fines are present in the feed, curved plates are sometimes used. The lower end of the swing jaw is concave, whereas the opposite lower half of the fixed jaw is convex. This allows a more gradual reduction in size as the material nears the exit, hence minimizing the chances of packing. Less wear is also reported on the jaw plates, since the material is distributed over a larger area.

The speed of jaw crushers varies inversely with the size, and usually lies in the range of 100-350 RPM. The main criterion in determining the optimum speed is that particles must be given sufficient time to move down the crusher throat into a new position before being nipped again.

The maximum amplitude of swing of the jaw, or “throw”, is determined by the type of material being crushed and is usually adjusted by changing the eccentric. It varies from 1 to 7 cm depending on the machine size, and is highest for tough, plastic material and lowest for hard, brittle ore. The greater the throw, the less danger is there of chokage, as material is removed more quickly. This is offset by the fact that a large throw tends to produce more fines, which inhibits arrested crushing. Large throws also impart higher working stresses to the machine.

In all crushers, provision must be made for avoiding the damage which could result from uncrushable material entering the chamber. Many jaw crushers are protected from such “tramp” material (usually metal objects) by a weak line of rivets on one of the toggle plates, although automatic tripout devices are now becoming more common, and one manufacturer uses automatic overload protection based on hydraulic cylinders between the fixed jaw and the frame. In the event of excessive pressure caused by an overload, the jaw is allowed to open, normal gap conditions being reasserted after clearance of the blockage. This allows a full crusher to be started under load.

Jaw crushers range in size up to 1680 mm gape by 2130 mm width. This size machine will handle ore with a maximum size of 1.22 m at a crushing rate of approximately 725 TPH with a 203mm set. However, at crushing rates above 545 TPH the economic advantage of the jaw crusher over the gyratory diminishes; and above 725 TPH jaw crushers cannot compete with gyratory crushers. 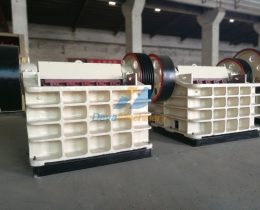 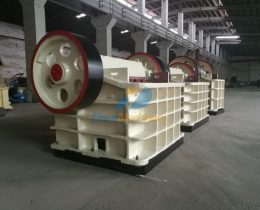 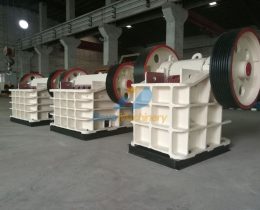 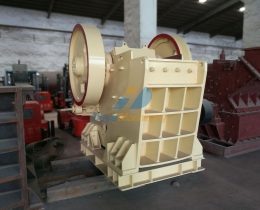 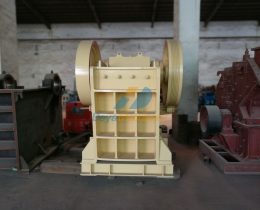 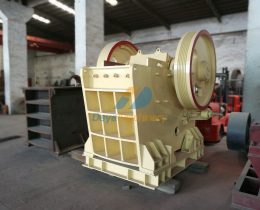 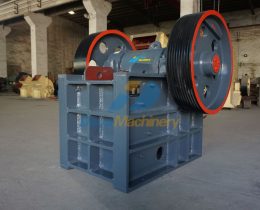 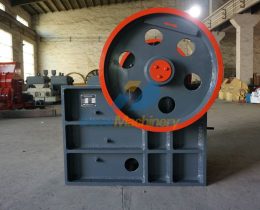