Jaw crushers are used for crushing of a wide variety of materials in the mining, iron and steel, and quarry industries. In quarry industry, they are used for crushing of rocks into gravels for road-building and civil works. Crusher machines are equipped with a pair of crusher jaws namely; fixed jaws and swing jaws. Both jaws are fixed in a vertical position at the front end of a hollow rectangular frame of crushing machine. The swing jaw is moved against the fixed jaws through knuckle action by the rising and falling of a second lever (pitman) carried by eccentric shaft. The vertical movement is then horizontally fixed to the jaw by double toggle plates. Because the jaw is pivoted at the top, the throw is greatest at the discharge, preventing chocking.

The crushing force is produced by an eccentric shaft. Then it is transferred to the crushing zone via a toggle plate system and supported by the back wall of the housing of the machine. Spring-pulling rods keep the whole system in a condition of no positive connection. Centrifugal masses on the eccentric shaft serve as compensation for heavy loads. A flywheel is provided in the form of a pulley. Due to the favorable angle of dip between the crushing jaws, the feeding material can be reduced directly after entering the machine. The final grain size distribution is influenced by both the adjustable crusher setting and the suitability of the tooth form selected for the crushing plates.

Thus, the crusher jaws must be hard and tough enough to crush rock and meet the impact action generated by the action of swing jaws respectively. If the jaws are hard, it will be efficient in crushing rock but it will be susceptible to fracture failure. On the other hand, if the jaws are tough, the teeth will worn out very fast, but it will be able to withstand fracture failure. Thus, crusher jaws are made of highly wear-resistant austenitic manganese steel casting, which combines both high toughness and good resistance to wear.

The first stage of size reduction of hard and large lumps of run-of-mine ore is to crush and reduce their size. Softer ores, such as placer deposits of tin, gold, mineral sands, etc., do not require such a treatment. Large-scale crushing operations are generally performed by mechanically operated equipment such as jaw crushers, gyratory crusher and roll crushers. For very large ore pieces that are too big for receiving hoppers of mechanically driven crushers, percussion rock breakers or similar tools are used to break them down to size.
The mechanism of crushing is either by applying impact force, pressure or a combination of both. The jaw crusher is primarily a compression crusher, while the others operate primarily by the application of impact.

Jaw crushers are designed to impart an impact on a rock particle placed between a fixed and a moving jaw. The faces of the plates are made of hardened steel. Both plates could be flat or the fixed plate flat and the moving plate convex. The surfaces of both plates could be plain or corrugated. The moving plate applies the force of impact on the particles held against the stationary plate. Both plates are bolted onto a heavy block. The moving plate is pivoted at the bottom end and connected to an eccentric shaft. The function of the toggle is to move the pivoted jaw. The retrieving action of the jaw from its furthest end of travel is by springs for small crushers or by a pitman for larger crushers. As the reciprocating action removes the moving jaw away from the fixed jaw the broken rock particles slip down, but are again caught at the next movement of the swinging jaw and crushed. This process is repeated until the
particle sizes are smaller than the smallest opening between the crusher plates at the bottom of the crusher (the closed set). For a smooth reciprocating action of the moving jaws, heavy flywheels are used in both types of crushers.

Jaw Crusher Circuits
Primary jaw crushers typically operate in open circuit under dry conditions. Depending on the size reduction required, the primary jaw crushers are followed by secondary and tertiary crushing. The last crusher in the line of operation operates in a closed circuit. That is, the crushed product is screened and the oversize is returned to the crusher for further size reduction, while the undersize is accepted as the product.

Jaw crushers are installed underground in mines as well as on the surface. When used underground, jaw crushers are commonly used in open circuit. This is followed by further size reduction in crushers located on the surface. When the run of mine product is conveyed directly from the mine to the crusher, the feed to the primary crusher passes under a magnet to remove tramp steel collected during the mining operation. A grizzly screen is placed between the magnet and the receiving hopper of the crusher to scalp (remove) boulders larger than the size of the gape. Some mines deliver product direct to storage bins or stockpiles, which then feed the crushers mechanically by apron feeders, Ross feeders or similar devices to regulate the feed rate to the crusher. Alternately haulage trucks, front-end loaders, bottom discharge railroad cars or tipping wagons are used. In such cases, the feed rate to the crusher is intermittent which is a situation generally avoided. In such cases of intermittent feed, storage areas are installed and the feed rate is regulated by bulldozers, front loaders or bin or stockpile hoppers and feeders. It is necessary that the feed to jaw crushers be carefully designed to balance with the throughput rate of the crusher. When the feed rate is regulated to keep the receiving hopper of the crusher full at all times so that the volume rate of rock entering any point in the crusher is greater than the rate of rock leaving, it is referred to as choke feeding. During choke feeding the crushing action takes place between the jaw plates and particles, as well as by inter-particle compression. Choke feeding necessarily produces more fines and requires careful feed control. For mineral liberation, choked feeding is desirable.

When installed above ground, the object of the crushing circuit is to crush the ore to achieve the required size for downstream use. In some industries, for example, iron ore or coal, where a specific product size is required (iron ore –30 + 6 mm), a careful choice of jaw settings and screen sizes is required to produce the minimum amount of fines (i.e. – 6 mm) and the maximum amount of lump ore within the specified size range. For hard mineral bearing rocks such as gold or nickel ores where liberation of minerals from the host rock is the main objective, further stages of size reduction are required.

Operating Functions
The ore or rock is fed to the crusher where the jaws are furtherest apart, i.e., at the maximum opening or gape. When the jaws come together the ore is crushed into smaller sizes and slip down the cavity. In the return stroke, further reduction of size is experienced and the ore moves down further. The process is repeated till particles having size less than the bottom opening or set pass through as product.
The rule of thumb applicable for operating a jaw crusher with respect to its design characteristics can be summarized as follows:

In practice, the operator has to decide on the spacing of the set at the discharge end. This setting has to include the maximum and the minimum positions that the bottom has to open during the oscillation of the bottom end of the jaws. The manufacturer of jaw crushers provides all the controls to adjust these settings. The actual distances are best measured by taking a soft metal, such as lead or a ball of aluminium foil, and by squeezing it between the jaws at the desired width forming a kind of template. This piece of lead metal is used to check the change of setting during operation.
During the operation of a crusher the bulk density of the material increases and the particle size decreases. With time, wear on the plate surfaces develops resulting in a change to the crusher surface profile. This could alter the throughput and size of the crusher product

Jaw Crusher Capacity Estimation
The capacity of jaw crushers is a measure of the mass or volume of crushed material produced in unit time of operation. The capacity is primarily a function of:
1. crusher design characteristics such as width and depth of the crushing chamber,
2. open and closed side settings,
3. options on feeding method, e.g., intermittent feeding (manual or direct by haulage trucks) and continuous by conveyor belt,
4. operating characteristics such as the length of stroke, the number of strokes per minute, the nip angle.

The capacity of a jaw crusher is given by the amount of crushed material passing the dis-charge opening per unit time. This is dependent on the area of the discharge opening, the properties of the rock, moisture, crusher throw, speed, nip angle, method of feeding and the amount of size reduction.

In a comminution plant where the reduction of rock material or ore sizes is desired, two machines are commonly used for primary crushing: the jaw crusher and the gyratory crusher. In primary crushing, the material is typically fed directly from the blast sites and dumped into the crusher from a dump truck. This implies that the size range of the material is large and can differ by up to three orders of magnitude between the smallest and largest particles (1–1000 mm). Both gyratory and jaw crushers can handle very large incoming feed sizes due to their design. In a jaw crusher, the material
is crushed between two plates: a static plate and a moving plate. Compression is applied by the moving plate, and the material becomes crushed. The size reduction obtained by a jaw crusher is form conditioned crushing due to the nature of the machine. There are two main types of jaw crushers, single toggle and double toggle. The difference being the resulting motion of the jaw depending on the design. Jaw crushers have proven to be a workhorse in the aggregates industry and are machines that reduce the top size but do not create fines or cubical particles to the same extent as, for example, a cone crusher. Jaw crushers are mainly used in operations where the volumes involved do not justify a gyratory crusher. The throughput of a jaw crusher ranges between 30 and 1200 tph. 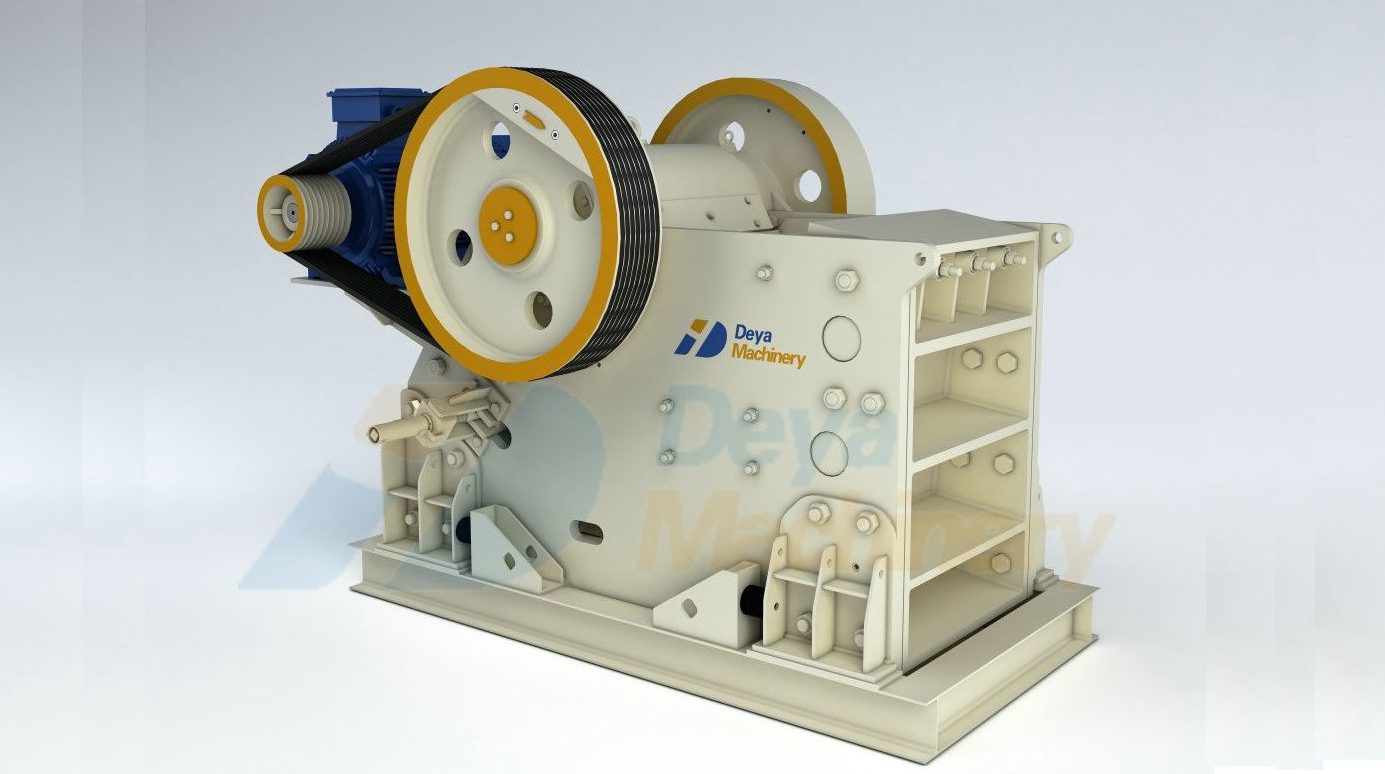