Hydrocyclones demonstrate a trait that is useful for gold mills – minerals with higher specific gravities having a progressively finer cut-size (whether this is desired or not). In plants with free-milling gold, this leads to gold concentrating in the milling circuits (see attached). On a size-by-size basis, concentrations of up to 100 times can occur in cyclone underflow. In this respect, hydrocyclones are outstanding rougher concentrators. Many operations take advantage of this effect by installing gravity-concentration units in the grinding circuit. Treating a split of the cyclone underflow is perhaps the most common, but ball-mill discharge and cyclone feed streams have also been treated. 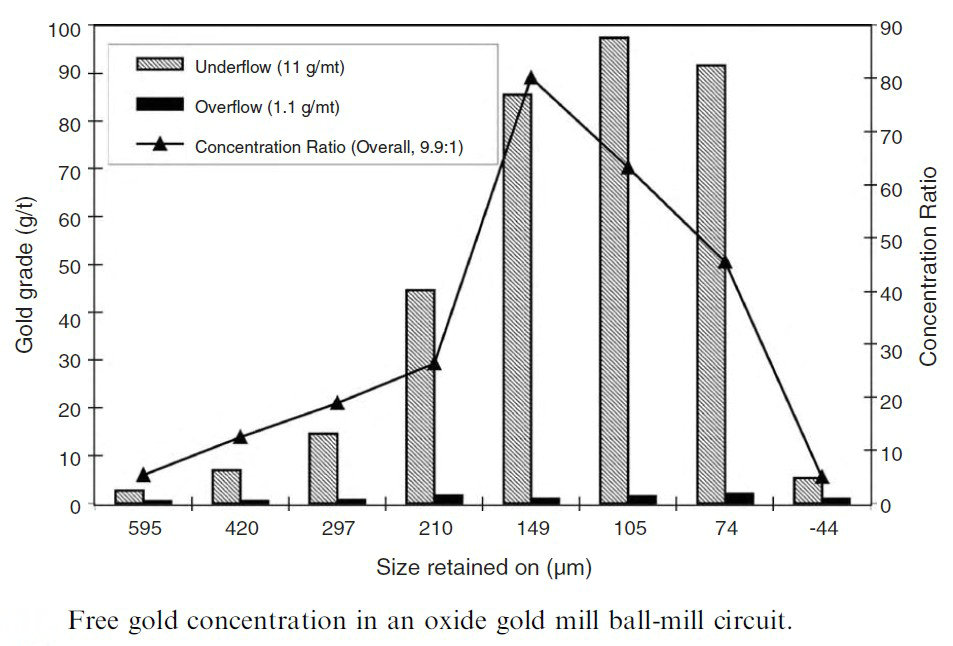 Flash flotation is also used in comminution circuits for gold recovery. The application on cyclone underflow is generally similar to integration of a gravity circuit. Milling-in-cyanide is also conducted by many operations. Cyanide and lime are added to the grinding circuit, often with trimming of both pH and cyanide levels during the subsequent leach process. There is relatively little information published concerning leach kinetics, but the addition of cyanide to the milling circuit clearly initiates the leach process earlier. This practice is not recommended for those ores that contain preg-robbers (which necessitates the use of carbon-in-leach (CIL)), or when pre-aeration is required to passivate cyanicides. In the case of cyanicides requiring pre-aeration, adding cyanide to the milling circuit can dramatically increase the total amount of cyanide required.