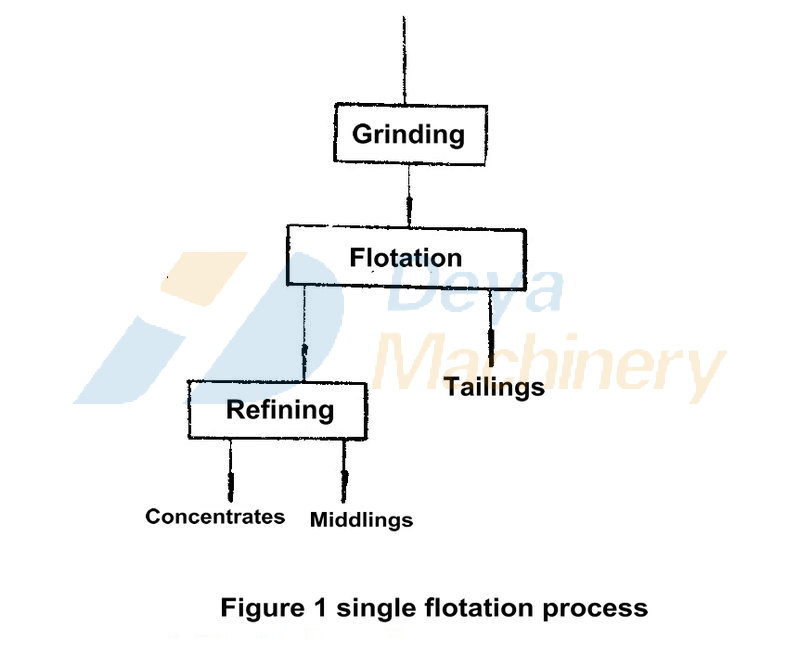 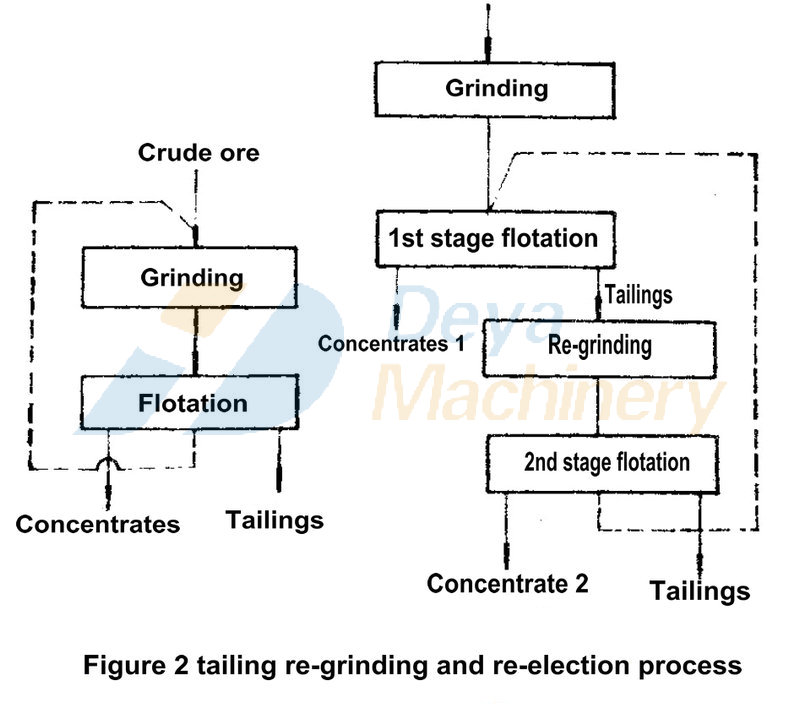 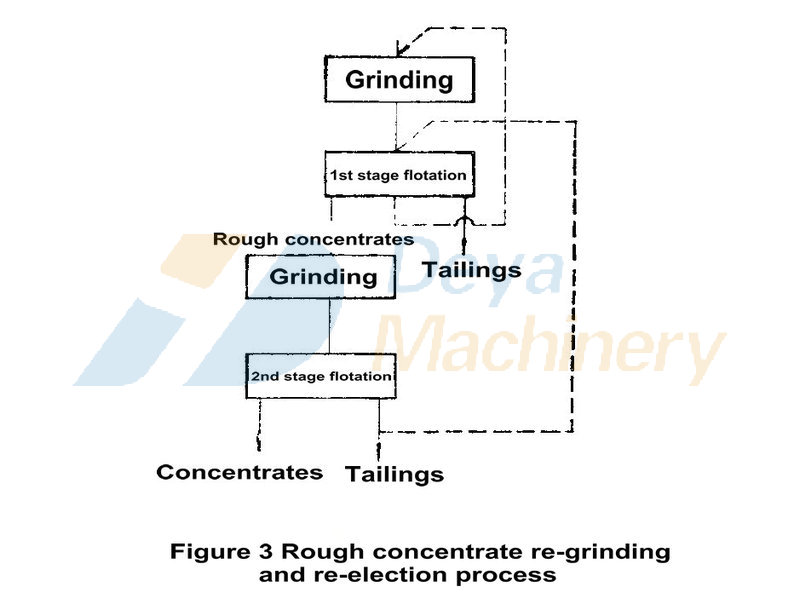 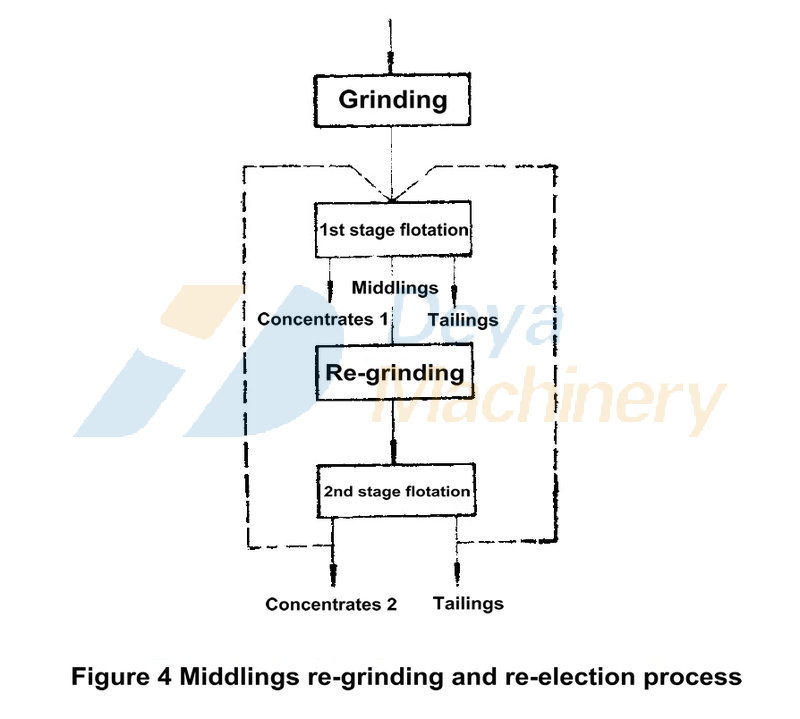 The principle process of flotation of polymetallic ores (e.g. polymetallic sulphide ores containing copper, lead and zinc) can be mainly divided into the following 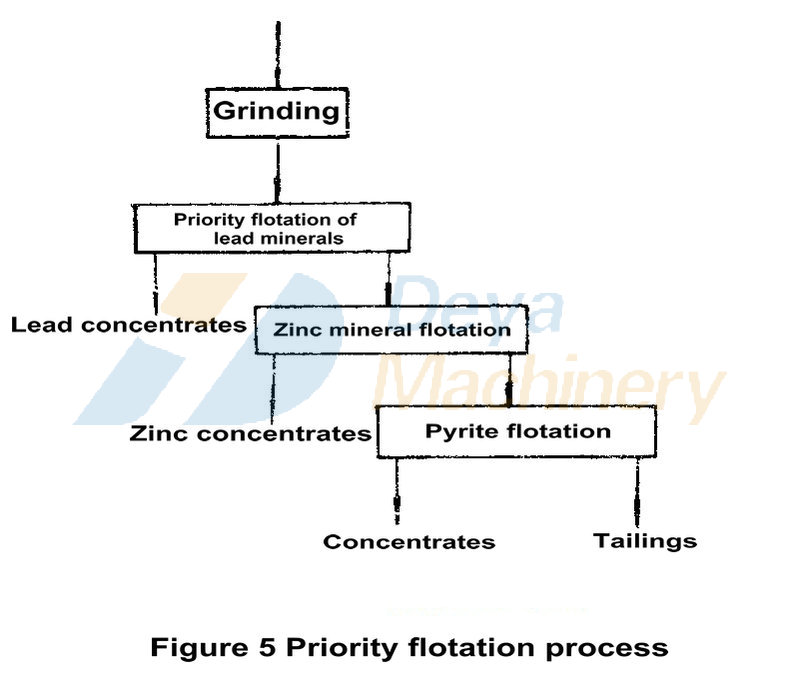 All useful minerals in the ore are floated out together first to obtain a mixed concentrate, and then the mixed concentrate is sorted out in order to select various useful minerals one by one, this process is called the mixed flotation process (Figure 6); this process is suitable for the total content of sulfide minerals in the original ore is not high, close symbiosis between sulfide minerals, complex structure, embedded in the fine particle size of the ore, it can simplify the process, reduce mineral over-crushing, thus facilitating the sorting. The former Soviet Union Almak lead-zinc ore processing plant uses this process to obtain higher indicators than the priority flotation process, lead concentrate grade increased by 10%, zinc concentrate grade increased by 4.5%, the comprehensive utilization rate of the ore from 75.4% to 83.7%, labor productivity caught twice as high, China’s Qingchengzi lead-zinc processing plant, Xiaotieshan copper ore processing plant production process also belongs to this process. 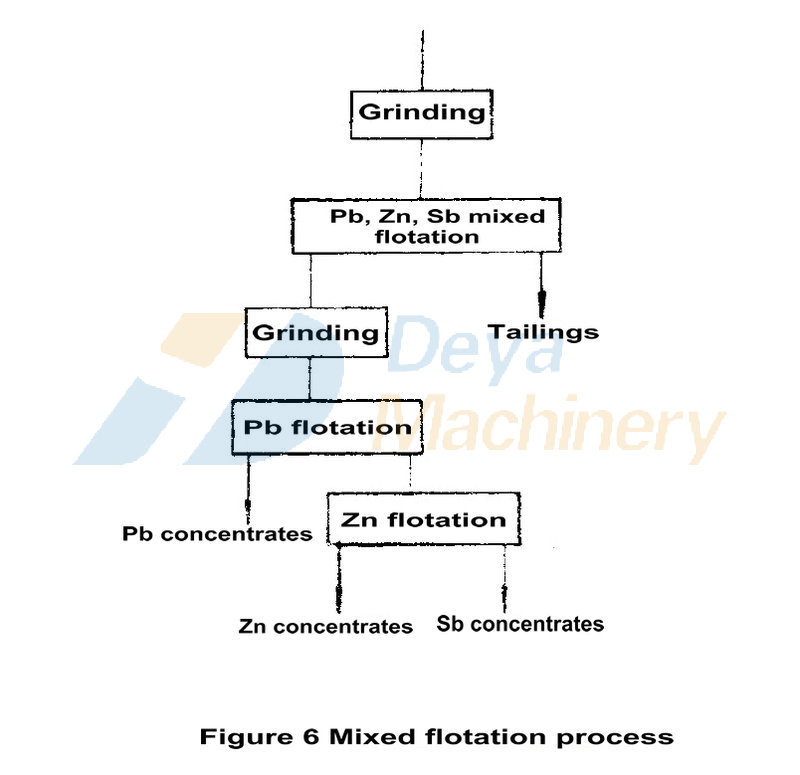 The process of first floating two useful minerals in the ore together to obtain a mixed concentrate, and then separating the mixed concentrate from the single concentrate, is called partial mixed flotation process (Figure 7). This is the most widely used type of process in production. When one of the lower grade of original ore of copper and molybdenum, copper and lead, copper and zinc, lead and zinc, often use this type of process, which is more economical, China’s Taolin, Huanren, Tianbaoshan, Hesan, Zhang Gongling, Xiangkuang, Bajiazi and other copper, lead, zinc processing plant are used in this type of process. 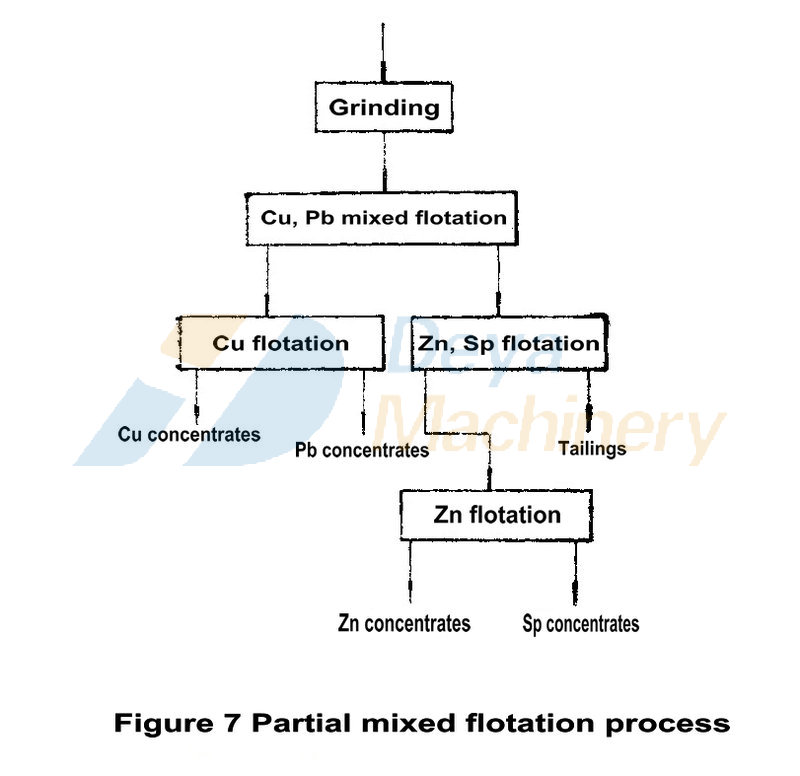 According to the good or bad floatability of minerals in the ore, flotation of good, medium and poor floatability of mineral groups, and then each mixed concentrate in turn to separate out different useful minerals process, called equal flotation flotation process (Figure 8), such as China’s Huang Sha Ping lead-zinc ore processing plant, the former Soviet Union Zhezkazgan copper-lead ore processing plant process. 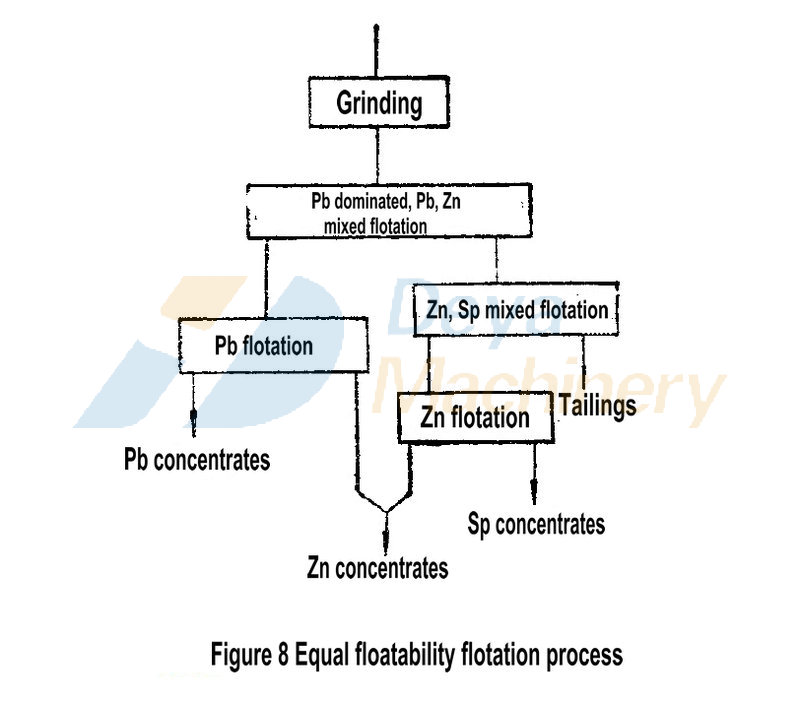 In order to adapt to the trend of the ore to “poor, fine, miscellaneous”, most of the world’s plants of flotation process are in the development. In order to ensure a high number of quality indicators, at the same time, to improve the comprehensive utilization of ore as the focus of the reform process. The development of the process structure mainly in the following areas.

A process called “L-S (Cleaner-Scavenger) process” (Figure 9), has become a model for processing large molybdenum-bearing porphyry copper ore beneficiation. It has played a positive role in expanding the raw material base of the copper and molybdenum industry because it enables new poor deposits to be mined and the medium- and low-grade ore from mined mines to be utilized. 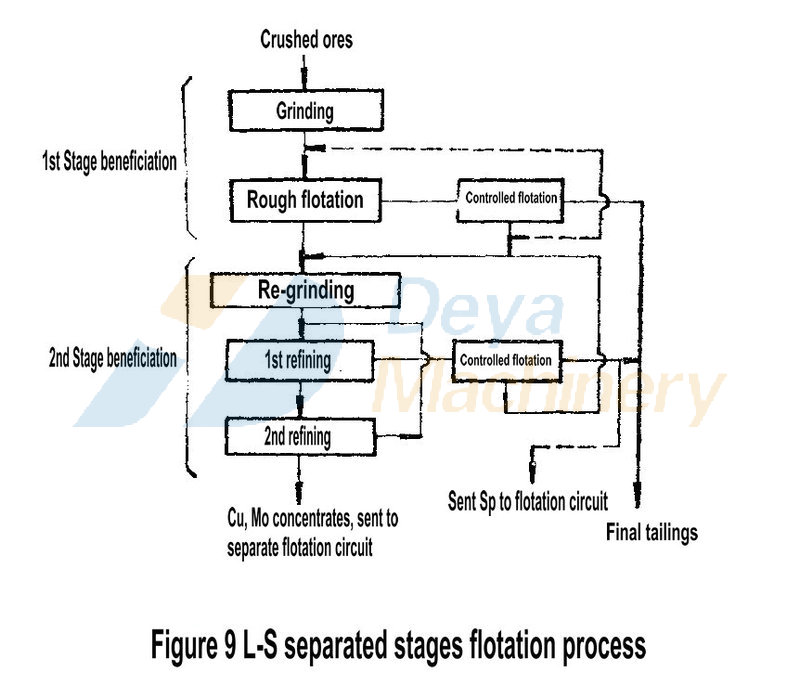 The “L-S process” is essentially a hybrid-priority process. It has the following advantages.
1) Process diagram, equipment and design layout are not complicated, due to the use of closed circuit regulation, can ensure reliable automatic control, stable production.
2) The control of grinding and flotation and the regulation of conditions (ore size, slurry concentration, chemical regime, processing time, etc.) in each beneficiation stage are very favorable and unique.
3) The productivity of the mill and flotation machine in the first stage of beneficiation is high, and the investment and operating costs are minimal, while the resulting process index is high
4) The large amount of waste tailings discharged during the production process has a coarse particle size, which is easy to stack and can be subsequently utilized in the construction and other industries, and can also be used as a filler for underground mining.

The above advantages are very important for the economic efficiency and production stability of the plant.

Particle-level flotation and mud-sand sorting process, in the processing of leaching fine particle size, easy mud, mud containing more ore, in order to expand the lower limit of the recovery size of fine-grained minerals, reduce the interference of the mud, reasonable drug, etc., particle-level flotation and mud, sand sorting process as a new process to improve the efficiency of sorting is applied and developed, such as the United States of America’s Tweensby Ute, Australia’s Morgan Hill copper ore processing plant, the former Soviet Union Zhezkazgan and Bakhashi plant, Japan Songfeng plant are in the use of mud and sand sorting process, process indicators to obtain a substantial increase.

Intermediate flotation. The use of intermediate flotation under coarse grinding conditions is an effective measure to reduce the single dissociation state mineral mud. Production practice has identified that after coarse grinding, a considerable amount of useful minerals are in the coarse particle size, such has been single dissociation because of its coarse size and can not enter the flotation circuit with the cyclone overflow, but before flotation and no need to re-mill, so the design of intermediate flotation in time to recover the dissociated coarse particles, the tailings and then sent to the classification operation or back to the mill (Figure 10), therefore, the over-grinding phenomenon is significantly reduced, the loss of useful minerals in the fine particles decreases. At the same time, the average particle size of the final concentrate increases, which facilitates filtration and reduces cake moisture. In recent years, the coarse-grained flotation cell and flash flotation method developed by Otokunpu Finland will make the intermediate flotation process more complete and practical. 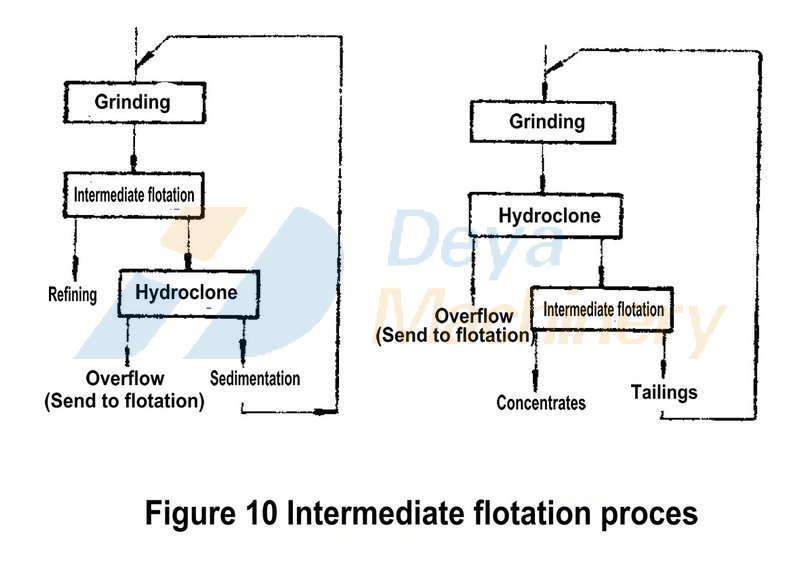 As shown in Figure 11, it is for the original ore grade is low. It can improve the original ore grade by itself; the difficult and fine-grained part of the pulp can be backed by the flotation product (froth) of the previous one as a carrier; it can also be used to reduce the drug consumption with the help of the remaining agent in the froth product of the previous one, and all these advantages are considered to be good conditions for improving the beneficiation index. China’s Yinshan lead-zinc ore processing plant has applied the process in the technical transformation of the process, and achieved good results. 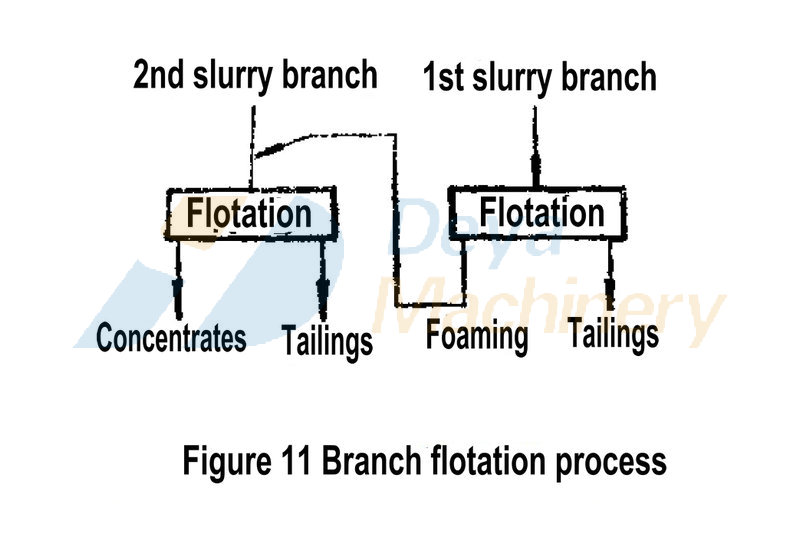