2. Flotation machine introduce air to produce air bubbles of suitable size, sufficient quantity and stability, so that they can be dispersed in the pulp, move with certain kinetic energy, and collide with pharmaceuticals and ore particles to produce selective adhesion and realize mineralization.

3. The mineralization bubbles can rise to the liquid surface, forming a three-phase froth layer and producing secondary enrichment; the froth concentrate and tailings can be discharged in time.

Figure 1 represents the connection between the flotation processes. The dashed boxes indicate the agitator barrel function and the solid boxes indicate the flotation machine function. Figure 2 shows the distribution of the zones of action within a mechanically agitated flotation machine. In the mixing zone, bubble groups and mineral grains carry out a large number of collisions, and some follow the impeller agitation for turbulent motion, whose bubble speed can reach 100cm/s, but the bubble ascending and floating motion is slow. In the flotation zone, the mineralized bubbles gradually increase their flotation speed as the hydrostatic pressure decreases during the flotation process. At the froth area (or scraping bubble area), a large number of mineralized bubbles gather, the bubble floatation speed decreases or even stops, and the bubble merging increases, and the part of water leaked during the merging process when the hydration film ruptures takes away the poor hydrophobicity and weak adsorption of impurity particles caught in the froth layer, playing a secondary enrichment role. 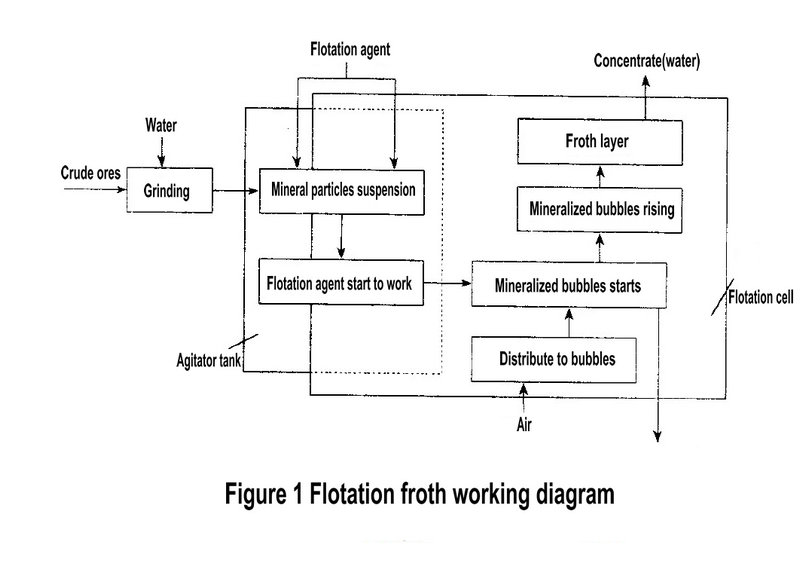 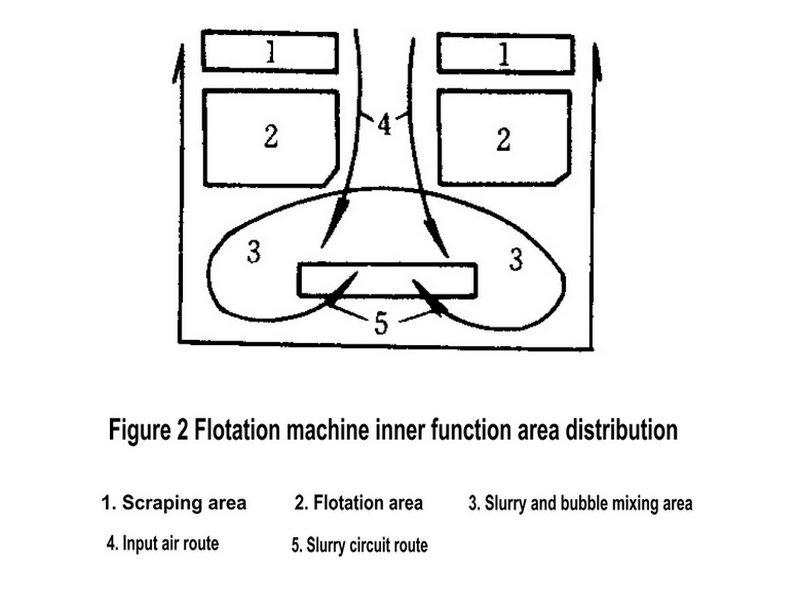 In flotation production, a flotation machine with good performance should meet the following requirements.

2. The mixing intensity should be sufficient to ensure the uniform distribution of slurry density, particles and bubbles, also the dispersion of the chemicals, and easy to restart directly after full load stop.

3. The slurry passing capacity is large to adapt to the higher processing capacity; the slurry circulation in the tank is large to ensure that the ore particles have more chances to contact with the air bubbles.

4. It forms stable slurry liquid level and froth layer, and discharges froth concentrate in a timely and stable manner.

6. Adapt to the need of automation, easy and flexible adjustment, reduce the number of detection instruments and actuators.

There is no unified standard for evaluating the performance of flotation machines in various industries, the following indicators are used more often and can be used as a reference basis for evaluation.

3. Aeration of the slurry in the flotation machine

There are three methods in principle for bubble generation.

Mechanical agitation flotation machine bubble generation is mainly through this method. In this case, rotors or impellers of different shapes agitate the pulp fiercely, causing a strong vortex movement of the pulp. Due to the shearing effect of the vortex, the air drawn into the flotation machine is dispersed into bubbles of varying diameters. The greater the relative speed of the pulp and bubbles, the higher the turbulence, the lower the air-liquid interfacial tension, the smaller the diameter and the greater the number of bubbles into which the airflow is divided by the vortex shear of the pulp. However, too strong stirring, energy consumption, unstable liquid level, bubble diameter is too small, also unfavorable to the floating of mineral particles.

The key components of a mechanically agitated flotation machine are the rotor and the stator. The rotor is the impeller, and its working parts can be similar to the shape of a water pump impeller – a turbine, a horizontal disc with upright blades, a hybrid impeller, etc. – or it can be a bar arranged vertically in a cage or a radial plate. When the rotor rotates, cavities are formed behind the blades to draw in air. The pulp around the blades forms two rows of vortices rotating in opposite directions (Carmen vortex), and the air is sucked by these vortices to the vortex center to form bubbles. The air bubbles formed in the turbulent pulsation speed generated by the dynamic pressure and shear force may be split into smaller bubbles. The farther away from the blade, the smaller the bubble splits.

Figure 3 shows the impeller dispersing the air into bubbles. Experiments show that there is a limit to the rotor’s ability to disperse air, and the ability of the impeller self-priming flotation machine to draw in air depends on the dispersion ability of the rotor and will not exceed this limit. Increase the number of blades or increase the blade speed can increase the inflatable volume, but the power consumption and wear will increase, and the liquid level may also be unstable, which is not good for coarse particle sorting. 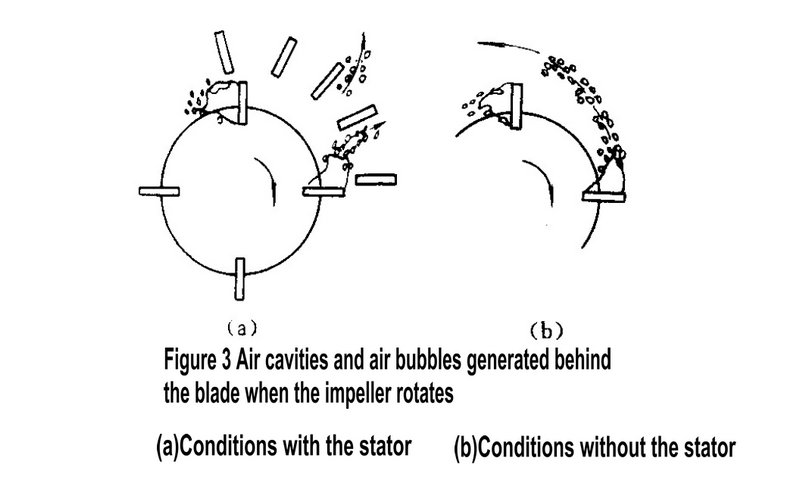 (2) Air forms bubbles through the tiny eyelets of porous media

This method is used for bubble generation in press-in flotation machines (e.g. flotation columns). The pressed-in air passes through the porous media with tiny holes, such as microporous ceramics, canvas and other special inflators to produce tiny bubbles, as shown in Figure 4. But the air pressure to be appropriate: too small is not conducive to air through the bubble number is small; too large and easy to form a jet stream and not bubble, and cause the liquid level instability. Pressure size by the inflator to decide. In addition, the size of the hole on the inflator and the interval also affects the bubble generation, the size of the hole affects the resistance of air through; interval is too small when the bubbles formed by adjacent holes are easy to meet and merge, the interval is too large inflatable volume is too small. 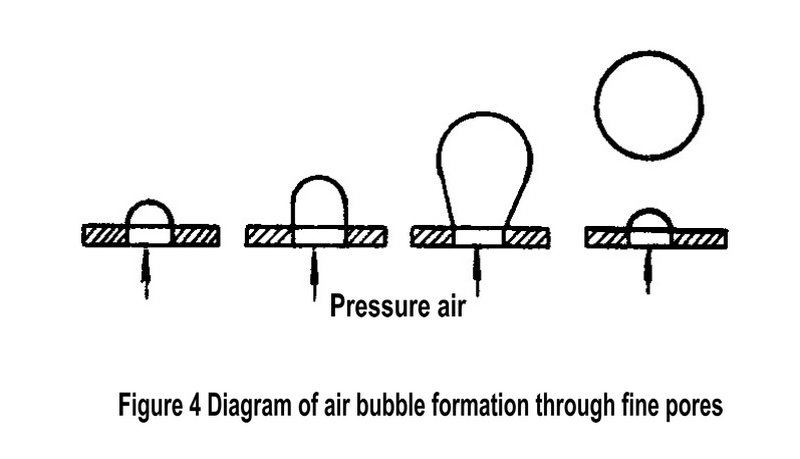 (3) Air precipitates from the slurry to form micro bubbles

The main factors affecting the precipitation of microbubbles are
A. The degree of saturation of air in the slurry at the beginning, i.e. the solubility of air. There are many opportunities to dissolve the pulp in the air, such as stirring, pumping, etc. can promote the dissolution of the pulp. In order to increase the solubility, the pulp pressure is an important measure, which is also the basis for the use of pressure pulp in modern jet flotation machines and so on.

B. The subsequent degree of depressurization of the ore slurry. There are many reasons for pulp depressurization, such as the injection of pressure pulp, the movement of pulp from the bottom of the trough to the top of the trough, the reduction of pressure at the trailing edge of the impeller blade, and the instantaneous pressure fluctuation and reduction caused by the impeller throwing out the pulp.

The number of microbubbles precipitated by different structures of flotation machines is different. Increasing the initial pressure of the pulp (e.g. stirring, pressurization) and the degree of pressure reduction (e.g. jetting, etc.), i.e. increasing the pressure difference before and after bubble precipitation, is an effective measure to obtain a large number of microbubbles.

2. Incorporation and dissolution of air bubbles

The final degree of pulp inflation depends not only on the process of inflation and dispersion, but also on the process of merging and dissolution of the generated bubbles. The merging of bubbles makes them larger in diameter, unstable and easy to break, reduces the bubble size and the total bubble area, which is not good for mineralization. The dissolution of bubbles makes them disappear, but the effect is not as obvious as the merger. Generally the smaller the bubble, the lower the degree of gas saturation in the liquid phase, the greater the solubility. However, the dissolution will also be precipitated by microbubbles when the pressure is lowered, so the annexation of bubbles should be mainly controlled. Adding frothing agent can improve the stability of bubbles and slow down the merging of bubbles. The generation and disappearance of bubbles in the flotation machine are two opposite processes, and quickly reach a dynamic equilibrium. Increasing stirring strength and adding frothing agents can make the balance develop in the direction of generation. According to the measurement, in the commonly used mechanical agitation flotation machine, the bubble diameter is between 0.05-1.5mm, of which 0.5-1.2mm is the majority, and its surface area accounts for about 80% of the total surface area of the bubble.

4. Determination and evaluation of the degree of pulp inflation in the flotation machine

1. Inflation volume and its determination

In addition, the structural parameters of the inflator, such as impeller diameter, shape, blade height and number, the distance between the impeller and the bottom of the tank, the shape of the stator blade, inclination angle, the gap between the impeller, etc. will affect the inflatable volume and bubble dispersion. Mechanical stirred flotation machine in the inflatable amount of good, the average volume of air is about 20%-30%, the inflatable amount will increase significantly bubble merging; excessive inflatable will also be a large number of mineral particles entrained in the foam, reducing the quality of concentrate, while causing the pulp level instability, increased energy consumption, especially for mechanical stirred flotation machine will also increase impeller wear and mineral mud.

2. The degree of air diffusion in the slurry

The filling volume indicates the quantity of filling, while the degree of air diffusion refers to the degree of air dispersion into bubbles at a certain filling volume, indicating the quality of filling. The higher the degree of diffusion, the smaller the bubbles generated, the more bubbles, the larger the total area of bubbles provided, and therefore the greater the chance of collision and adhesion between ore particles and bubbles. However, when the bubbles are too small, the floating speed is slowed down, which is not conducive to carrying the ore particles to the surface. Adding foaming agent can improve the degree of bubble diffusion: within a certain degree, the amount of foaming agent increases, the bubble diameter decreases. If 20mg/L pine oil is added to the pure water, the average diameter of bubble will be reduced from 4.5-8mm to 0.38mm. Increase the degree of agitation can also improve the degree of diffusion.

3. Uniformity of distribution of air bubbles in the slurry