Most of the chrome ores around the world are beneficiated by gravity concentration techniques. A conventional chromite ore beneficiation process plant (as following Figure) consist of two sections:

1.Communition (for preparing the material for the subsequent unit operations)
2.Concentration (classification and beneficiation).

The beneficiation process flow sheet varies from location to location according to the ore characteristics. For example, the chrome ore plant in Inner Mongolia comprises three stages: crushing (jaw and cone crushers) followed by two-stage grinding (rod mill and ball mill), followed by a combination of drum, cone, and highgradient magnetic separation. In Sichuan province, chromite concentrators consist of gravity separation (spiral chutes and shaking tables) for coarse chromite fractions and a combination of gravity separation and flotation for fines. 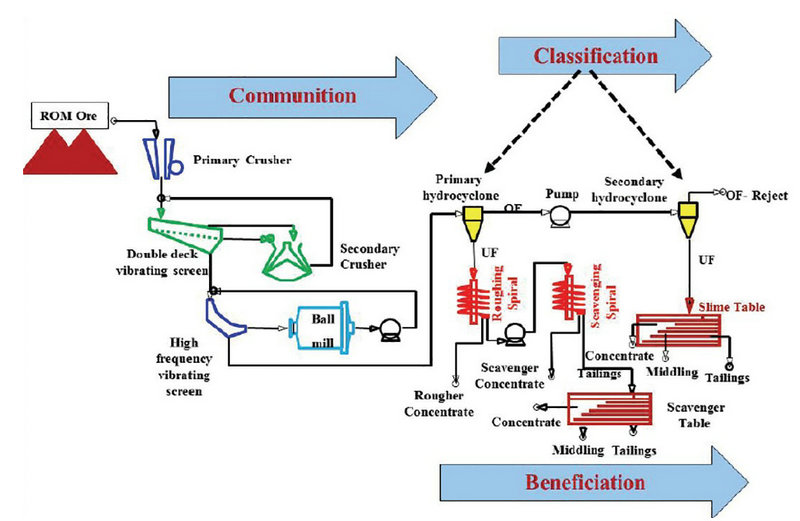 A typical chromite ore gravity concentration circuit comprises various configurations of hydrocyclones and spirals or floatex density separators combined with two or more stages of spiral circuit (typically roughing, cleaning, and recleaning) to overcome the inefficiencies created by the random misplacement and/ or bypass of particles. The selection of gravity concentration units is based on the particle size to be treated and the capacity, which is inversely proportional to particle size.

Every gravity concentration unit delivers its peak efficiency under specific operating conditions and particle size range for a given mineral. The key challenges an operator and circuit have to deal with are fine and ultrafine particles arising from the indiscriminate nature of the breakage process in conventional comminution methods and, to some extent, increased mechanization in mining to increase the production rate. Another common problem in many chrome ore beneficiation plants is the presence of fine silicate gangue phases which contaminate the final concentrate. This variability affects the overall performance of the plant in terms of grade, recovery, and throughput, including losses of valuable materials into the tailings. In practice, unsteady operation of beneficiation units in the process circuits, especially gravity-based units, arises due to numerous changes in the input to the plant such as feed characteristics, flow rate, mineral composition, percentage solids etc.

In the last two decades, numerous research papers, technical reports, and reviews have been published relevant to chromite ore beneficiation, but none on the performance evaluation of concentrators with respect to size and liberation of particles. Process control systems and related applications have been reported over the years in mineral processing plants. Such process control systems are generally developed from an extensive database that has been generated from the various operating parameters of the plant. For overall performance, it is necessary to diagnose the problems with individual unit operations of the circuit and investigate the alternatives for process improvement and cost reduction. Conducting surveys allows analysis of plant performance and presents opportunities to identify areas for improvement in the circuit, maintenance, and control. Maintaining a plant consistently at peak efficiencies requires knowledge and understanding of circuit performance and process control. The poor performance of the human operator in the control room is regarded as one of the key reasons for sub-optimal operation. Any beneficiation plant based on gravity separation has a potential to improve through appropriate application of existing process engineering expertise or using principles like the incremental quality concept and linear circuit analysis, but these techniques are often overlooked. Despite this advancement, plant performance has not always been in line with expectations. Mineral liberation data can be used as a fundamental parameter for process plant design and optimization. The significance and value of mineral liberation analysis in applied mineralogy and metallurgical processing has been well documented. The present investigation, on performance evaluation of an operating chromite ore beneficiation plant, was carried out based on the same concept in order to improve the quality and grade of the concentrate by eliminating siliceous gangue.

Improving the performance of a beneficiation circuit is always dependent on the performance of individual unit operations in the circuit. In an operating plant, it is very difficult to measure all the processes as well as operating parameters simultaneously. In order to effect improvements, accurate data collection and proper interpretation, followed by the necessary changes, plays a critical role in circuit performance. A critical aspect in collecting such a database hinges on documenting relatively small changes/improvements in an actual operating plant in terms of grade, recovery etc., which in turn affect the economics. A database collected over a period under various conditions would also help in overcoming future problems related to either variation in the feed characteristics or specific demand by metallurgical industries.

Process circuit optimization begins with a detailed audit of the operating plant under existing conditions, followed by modified conditions. Periodic shifts in the feed quality and size fractions are common. In practice, the cut size of the final classification stage is a compromise between achieving adequate liberation and avoiding slimes production. Under optimized conditions during trials, the change in spigot diameter of individual classifiers (rougher circuit, cleaner circuit, and scavenger circuit) from 33 mm to 35 mm resulted in a decrease in particle cut sizes: hydrocyclone no. 5 (d75 62–52 μm), hydrocyclone no. 6 (d50 56–40 μm), and hydrocyclone no. 7 (d50 70–30 μm) as shown in the following Figure. 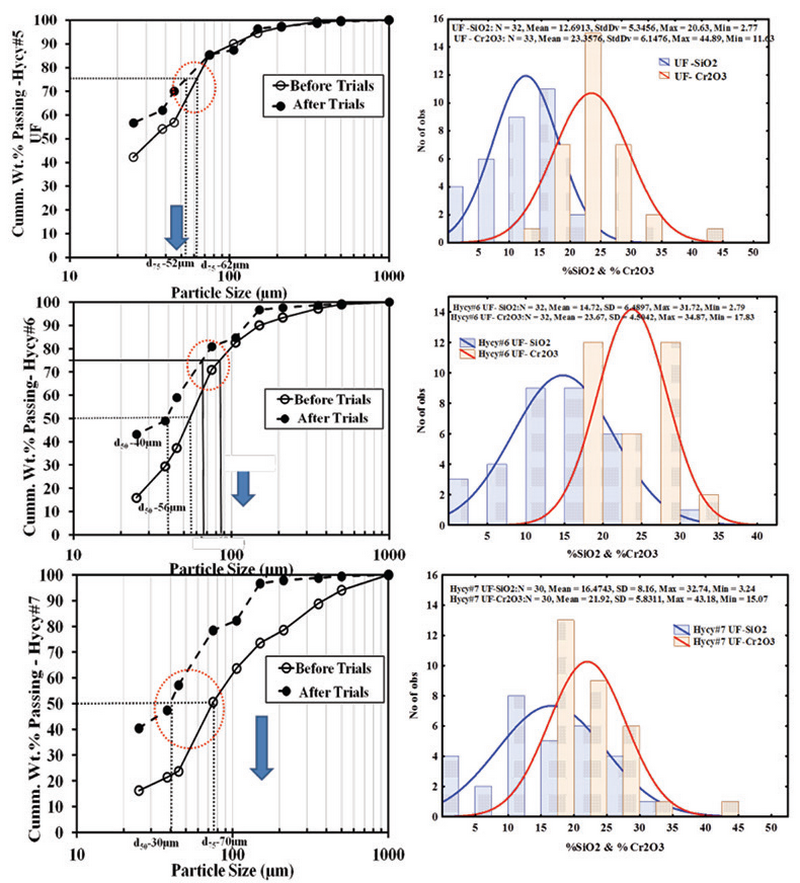 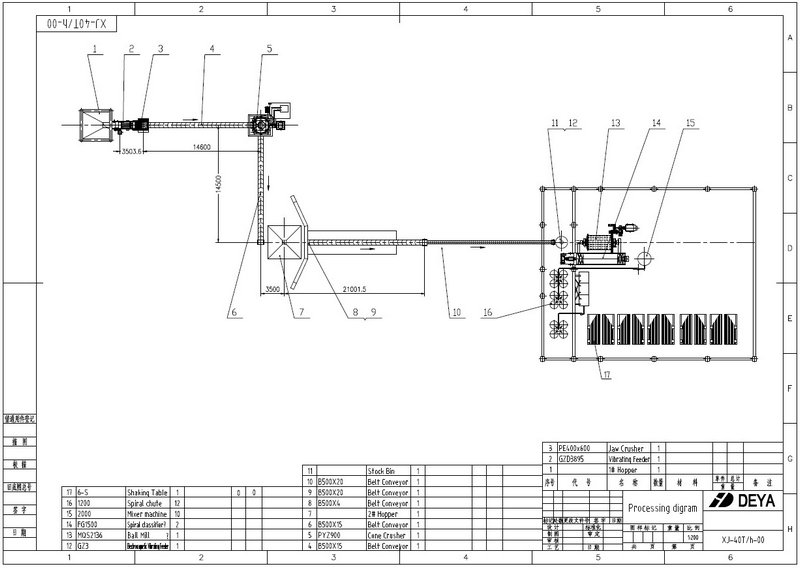 To understand the performance of the spiral circuit (i.e. rougher, cleaner, and scavenger), a complete set of feed to spiral and product samples was collected. The samples were characterized to understand the distribution of siliceous gangue and chromite particles. A clear band of separation between Cr2O3 and SiO2 particles is observed in the cleaner concentrate. The maximum Cr2O3 content in the concentrate was 49.44%, with a mean value of 34.85% and standard deviation of 6.93. 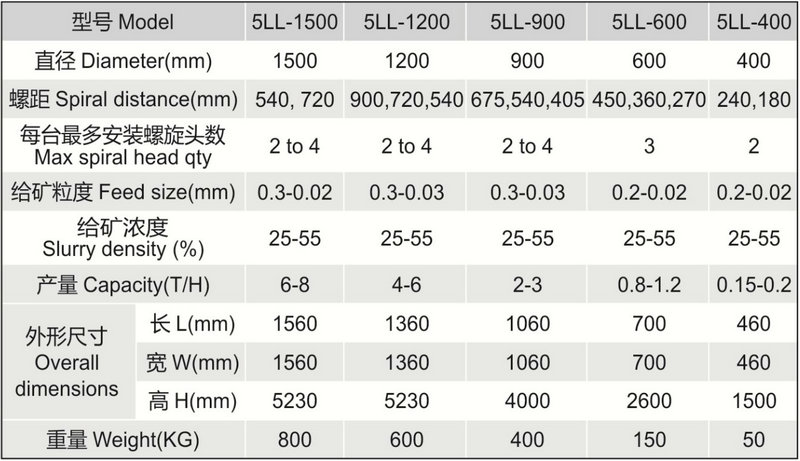 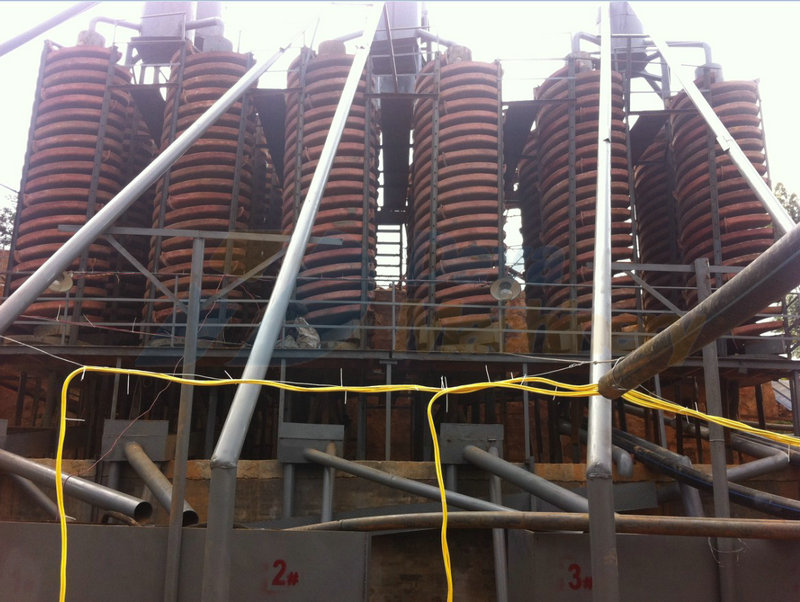 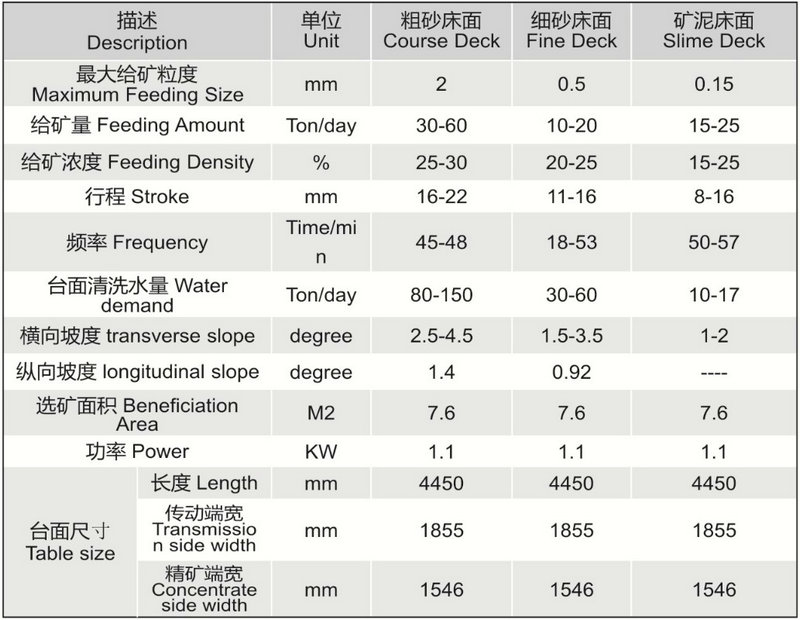 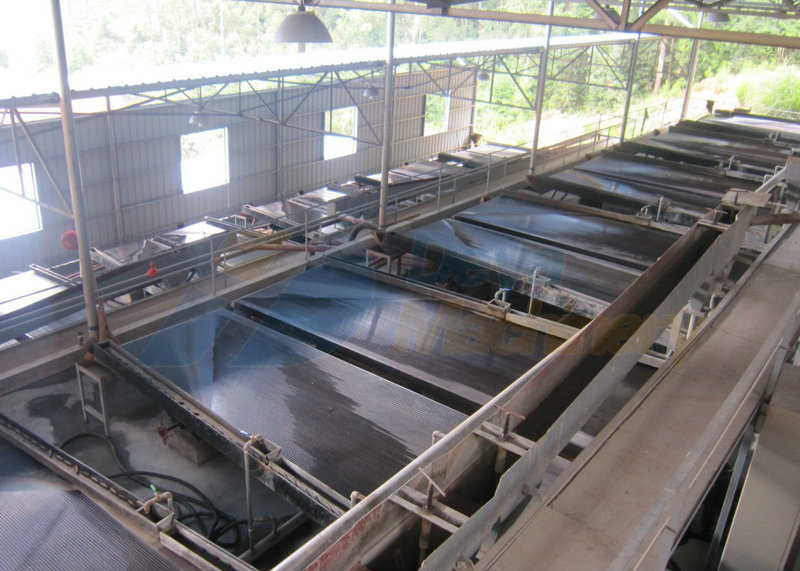